The Dead Sea Scrolls have to go down as one of the most incredible and exciting discoveries in the last 2000 years. These scrolls were carefully written by the Essenes, a Jewish sect who lived at Qumran during the time of Jesus.

It was in 1947 that Bedouin tribesmen herding their goats, entered one of the caves at Qumran. Since then, there have been literally over 900 scrolls and tens of thousands of fragments discovered. The Dead Sea Scrolls include over 225 copies of biblical books that date back to 1,200 years. These range from small fragments to a complete scroll of the prophet Isaiah, and every book of the Hebrew Bible except Esther and Nehemiah. Prior to their discovery the oldest known manuscripts dated back to the 10th century.

One of the most popular books in Bible is the Book of Isaiah. Isaiah was one of the great prophets of Israel and his beautiful, poetic, prophetic writings describe in great detail many things, including the return of the Messiah.

The words contained within the Book of Isaiah have withstood the test of time and history and have been a well of spiritual strength and inspiration for centuries. Therefore the discovery of this scroll in 1947, which is the book almost in its entirety, makes this probably one of the most important archaeological finds in the last 2000 years.

It is the oldest scroll ever discovered, over 1000 years older than any other discovered to date including subsequent copies that were later found in and around the area of Qumran. They can all be viewed at the incredible Israel Museum in Jerusalem, where the exact conditions at Qumran caves has been recreated to preserve the scrolls for future generations.

Jesus, Teacher of Righteousness to the Essenes?

As mentioned, the scrolls had been found in their original jars, stored in caves in Qumran, near the Dead Sea. The arid conditions of the desert combined with cool conditions within the jars in the caves, proved perfect conditions for preserving these delicate and important writings. 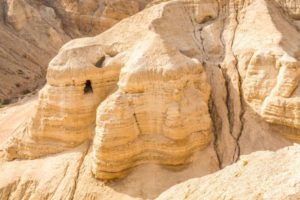 The Scrolls contain different versions of some books of the bible: Exodus, Samuel, Jeremiah, Psalms and Daniel. Whilst the scrolls do not mention Jesus directly, they do suggest that Jesus could have visited or even mentored the Essenes during his lifetime.

This is in part fueled by the fact that the Essenes believed they were living at the time foretold by prophets. A time when God would establish a kingdom of peace. Their writings also mention a “Teacher of Righteousness,” who revealed the true meaning of the scriptures. There is also mention of the “Son of God” and the “Council of Twelve.”

References to a communal meal, baptisms, healings and the coming of a Messiah. Could these people have been inspired by the Son of God in person? Very possibly.

What we know for sure is they had broken away from the traditional Jewish ways and where regarded as an apocalyptic sect, preparing for a rapture-like judgement day. Perhaps the first Messianic Jews? These special scribes, lived a lifestyle not unlike monks, although some did marry. They were totally committed to what they did. They wrote, preserved and hid the scriptures. Which survived thousands of years. Could these amazing scribes have been inspired by the Son of God directly?

With the Sadducess and Pharisees in constant conflict with Jesus, perhaps the Essenes – the third sect in Judaism mentioned by Flavius Josephus – could have been Jesus’ only allies It makes a very strong argument.

While the Essenes existed between B.C. 100 to the destruction of Jerusalem, they are not directly mentioned in the gospels. Although some scholars think that they may be referred to in Matthew 19:11 & 12.

One thing is for sure, this mysterious, committed, Jewish sect were misinterpreted and misunderstood. Biblical scholars now believe that the Essenes did not die out at all, but later became known as Christians.

“Jesus did many other things as well. If every one of them were written down, I suppose that even the whole world would not have room for the books that would be written.” (John 21:25)