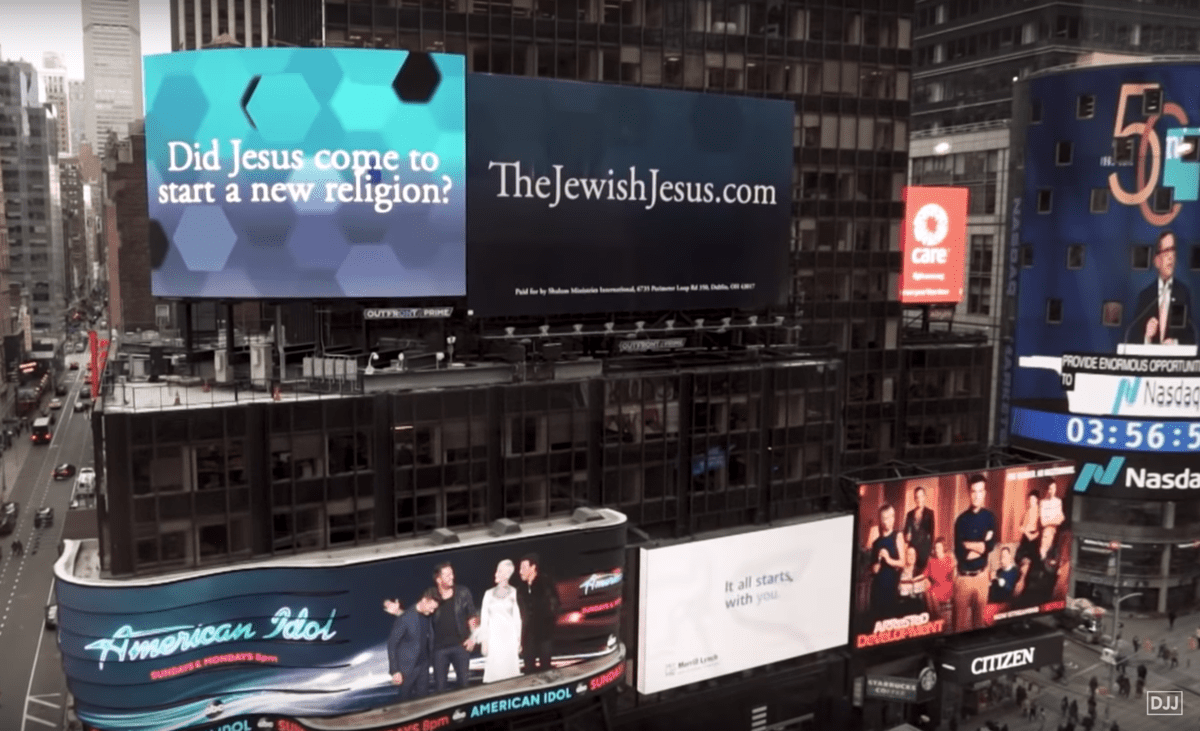 Against a backdrop of brilliantly lit giant billboards, Times Square is one of the world’s biggest media and entertainment hubs. The streets and pedestrian plazas are filled with multitudes of people thronging to broadway shows or restaurants. It’s one of New York’s top tourist destinations and a meeting place for people from all nations.

Each of the towering bill boards has a message to share to a mass audience and what could be more important than the Gospel? It’s no surprise then, that Messianic Jewish Rabbi, Kirt Scheider has taken the opportunity to bring Jesus to Times Square. And not just the Jesus people think they know through Christianity, but the Jewish Jesus in a city that has a significant Jewish population.

Rabbi Kirt Schneider is the host of Discovering The Jewish Jesus on GOD TV which can be seen on air on on Tuesdays and Sundays at 9.30 am or watched on god.tv on demand. Watch the video below as he talks about his new digital billboard. Towering above the crowds in Times Square it asks New Yorkers two very important questions:

Of course these are questions not just for New York, We’d all like to find out. So visit The Jewish Jesus and hear how Rabbi Schneider was suddenly awoken from his sleep, as a young Jewish man. He had been feeling isolated, unfulfilled and lost but that all changed when he received a vision.  40 years later he is still encouraging people to encounter the Jewish Jesus.

One of the ways you can do this is through his seven-part docuseries that will challenge many preconceived beliefs you may have about religion, and possibly change your worldview. As you watch, you will discover the answers to:

Discover the Jewish Jesus as Rabbi Schneider shares why people who were Jewish, who believed in Jesus when He came 2000 years ago, eventually became separated from the traditional Jewish community. He answers this from both a historical and theological perspective. “Jesus came as a Jew, lived as a Jew and died as a Jew. He still is a Jew and the Savior of Israel and of the whole world,” he says.