“Jesus Heals On Tiktok”: Woman Healed From Pain In Arthritis Through Prayer In Tiktok 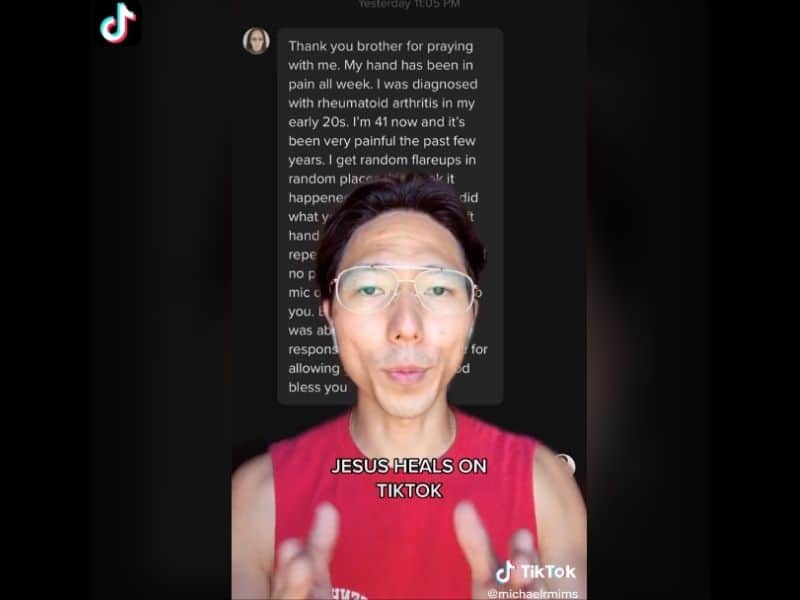 A woman testified about being healed after listening to a live video by a Christian on Tiktok. Apparently, she was suffering from severe pain in her hands caused by Rheumatoid Arthritis. But, Jesus healed her and setsher free from the pain and sickness.

Michael Mims, from Chicagoland, loves to use Tiktok as a platform to pray and share the goodness of God. Unlike the mainstream videos, his videos do not show him dancing to a certain choreography. Rather, he preaches about Biblical truths and prays healing for those who needed.

Last Friday, Michael did a live video which he noted, he doesn’t do that often. He said, “So, it is surprising to me that anybody showed up.” He was praying specifically about healing and breakthrough when a woman joined. She asked for prayers for her Rheumatoid Arthritis.

“Well, she says that immediately after her hand begins to free up and she feels painless. Now, instead of using voice text issues doing in her life, she was able to type in the keyboard.”

He exhorted, “I can’t make this up. I wouldn’t want to. Jesus is real. He’s moving. Amen!”

The woman typed her testimony. She wrote, “Thank you brother for praying with me. My hand has been in pain all week. I was diagnosed with rheumatoid arthritis in my early 20s. I’m 41 now and it’s been very painful the past few years. I get random flare-ups in random places this week it happened to be my hand.” 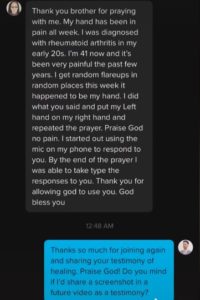 She continued, “I did what you said and I put my left hand on my right hand and repeated the prayer. Praise God no pain. I started out using the mic on my phone to respond to you. By the end of the prayer, I was able to take type the responses to you. Thank you for allowing God to use you. God bless you.”

The woman reported she doesn’t have any pain at all since the prayer.