BREAKING
Israel-led Team Solves Mystery Why Lightning Strikes Fewer Times Over The Ocean...
Tourism In The Holy Land Is Soaring Back Up To Pre-Pandemic Highs
Lapid Speaks Directly To Palestinians—Offers Them “Another Way” Out Of The Ongoing...
Home Faith How a British Couple took the Gospel to the Races, with Evangelist Andrew Palau

How a British Couple took the Gospel to the Races, with Evangelist Andrew Palau 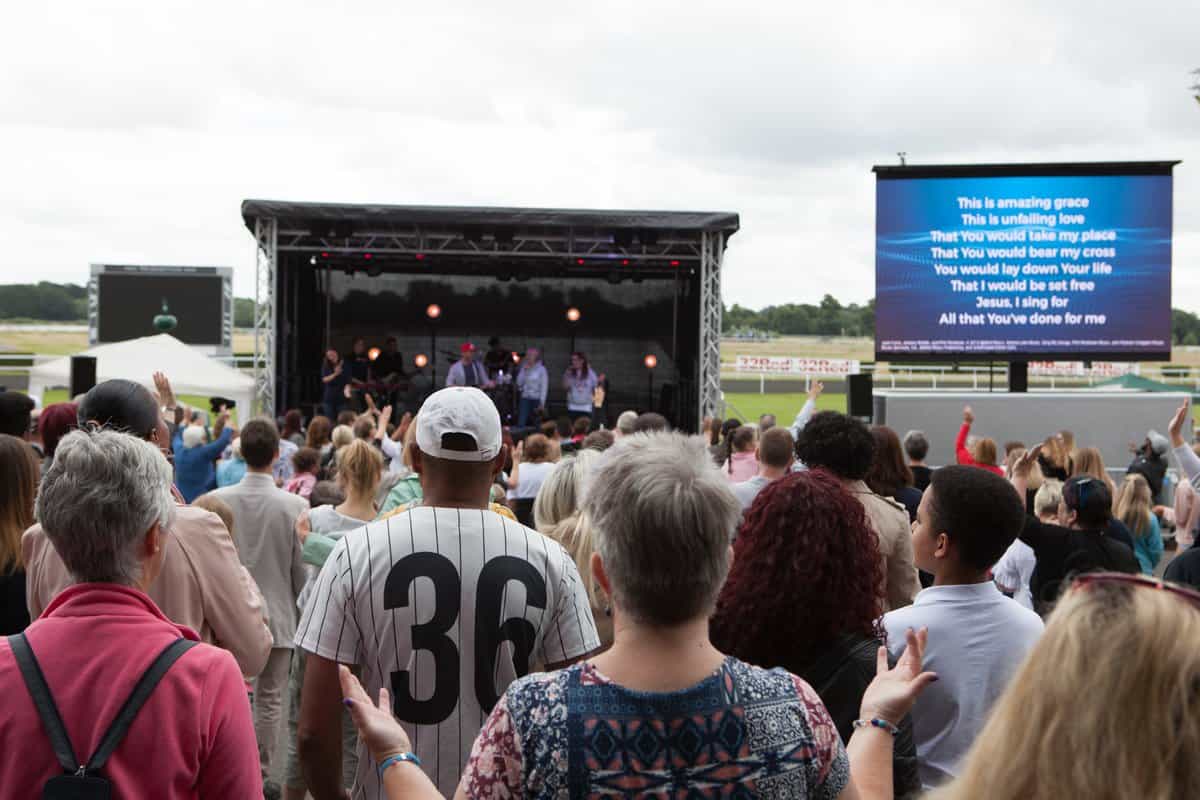 While there have been numerous recent reports indicating the UK is at an all-time low in Christian population and regular church attendance, a number of unified, areawide evangelistic campaigns have given a different picture of the state of the Church in the British Isles. One of these events – Joy @ Kempton Park with Andrew Palau in Sunbury, England – went as far as to engage the entire community in the effort, regardless of religious background. 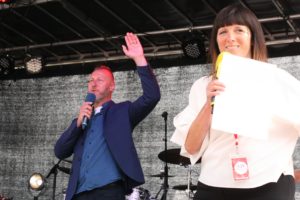 It took the vision of one British couple, tenacity of a dozen UK Churches, and collaboration of a handful of Christian ministries in conjunction with the Luis Palau Association to make the event possible at the racetrack in Sudbury on June 16th.

Joy @ Kempton Park was first dreamt up by Rowena Cross, director of mission, evangelism and discipleship at St Saviour’s Church in Sunbury-on-Thames, Surrey. While on holiday in 2017, her husband Ron, vicar of St Saviour’s, felt the Lord pushing him to increase his vision for the church.

Rowena had spent years dreaming about a large evangelistic event at the town’s famous Kempton Park racecourse. She knew it was far from possible in her own ability. And for a church of their size, there was no way they could accomplish something of that nature on their own. But she felt the Lord challenging her to step out. And she took that challenge to the community.

It started with the racetrack. She approached them boldly with her request, simply stating, “There’s nothing in it for you, you’ll have to give it to us for free.” To her surprise, they agreed. In fact, they were quite excited about it.

A conversation with a close friend led her to Dave Plowman, the UK Director of the Luis Palau Association. Dave was quick to jump on board and offered the support and encouragement of the Palau Team. When evangelist Andrew Palau, son of Luis Palau, heard of the campaign, he jumped in as well, offering to come and speak at the event. The Palau Team also helped with the program, logistics, and training of believers.

Next came the Philo Trust, headed by evangelist J.John. Then the New Wine leadership. Then Michael Harvey of National Weekend of Invitation. Each group offered their experience and expertise – helping with training, promotion, community service, and church relations.

Along with the evangelistic outreach that was planned for Kempton Park, a practical service project, dubbed Love Sunbury, helped take the message to the community as well. Included in the effort were neighborhood clean-up projects, home revitalization projects, and a massive “feeding of the 5,000.” 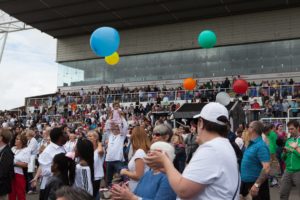 By the time the weekend events had arrived, nearly half a dozen ministries, more than 15 local churches, and hundreds of Christians had stepped in to bring Rowena’s vision to fruition. Hundreds of locals had been served and thousands had been fed.

“We have been blown away by how much God has led and guided the local Christians into what appears to be a completely Kingdom-focused and grassroots evangelistic movement,” Palau’s UK Director Dave Plowman said.The afternoon festival, coincidentally timed to take place on Father’s Day, was the perfect culmination.

With more than 2,000 people converging on the racetrack to enjoy the family fun, music, and message of Good News from Andrew Palau, Rowena and the team rejoiced.”Only God could have done this,” she shared. “At every opportunity God has provided us with what we needed – sometimes before we even knew we needed it. We had no money, no budget, nothing. It’s about going beyond what we’re capable of doing as humans.” 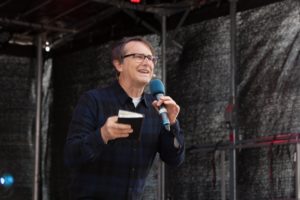 And God didn’t stop there. As Andrew Palau shared the Gospel and invited the crowd to respond to the call of the Savior, Rowena’s own father raised his hand boldly in public confession and renewed commitment to the Lord. Rowena had been praying for him for years, that he would experience a special touch from the Lord.

“While Andrew was speaking, my father felt the Holy Spirit move for the first time,” shared Rowena. “It was so beautiful. He said his heart was changed forever.”With tears in both their eyes, they rejoiced at the Lord’s goodness, His guidance, and His perfect timing.

This seems to be the beginning of a new season of ministry and outreach for the United Kingdom. While in England, Palau and his team met with dozens of leaders in a handful of cities. From Birmingham to Wolverhampton, Bristol to SW London, each group had the same desire – to see the Church come together to proclaim the Good News on a massive scale in their community.

The Palau Team is excited to join in the ongoing effort, with plans already in place for a four-city UK tour with Andrew Palau and musician Martin Smith in October.

For nearly 25 years Andrew Palau has played a key role in the ministry of the Luis Palau Association. He has been instrumental in building the LPA model for citywide outreach as an evangelist, director, and key team leader. He has guided campaigns, led church relations efforts, trained thousands of believers in friendship evangelism, and proclaimed the Good News of Jesus Christ in person to hundreds of thousands of individuals in cities throughout Latin America, Africa, Asia, Europe, Australia, the Caribbean, and the United States of America.

Palau’s weekly radio broadcasts are heard by millions of people on hundreds of radio outlets. He is also the author of multiple books and a regular contributor to national publications with articles on issues of faith.