Justin Bieber Asks For Prayers As He Suffers Facial Paralysis

The now very outspoken Christian Justin Bieber asks for prayers as he announces that he is suffering from a syndrome causing facial paralysis.

Pop artist Justin Bieber announced to millions of followers on Instagram that he would be taking a break because of his condition. On Saturday, he shared a video revealing he had “Ramsay Hunt syndrome.” According to Rare Diseases, it “is a rare neurological disorder characterized by paralysis of the facial nerve (facial palsy) and a rash affecting the ear or mouth. Hence, in the video he shared, he showed his facial paralysis. He couldn’t control half of his face, seemingly like he had a stroke. 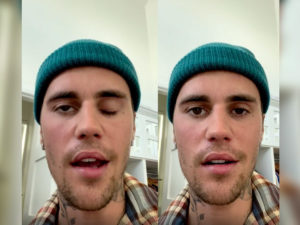 Also, according to Justin, his facial paralysis was caused by a virus.

“That attacks the nerve in my ear, in my facial nerves,” he said, “and has caused my face to have paralysis.”

Then the singer showed how his other eye wasn’t blinking. And how he can’t smile on the other side of his face as well.

Apparently, the pop icon wanted to inform his fans who were frustrated by the cancellation of his shows. Because of his pretty serious illness, he had no choice but to slow down and attend to his health. Justin was asking for his fans’ understanding.

Above all, as Justin wrote in his caption, he asks for everyone’s prayers. He also stressed that he believes everything would be okay because he trusts God. And although he doesn’t yet understand, for now, he knows that what he’s going through has a reason.

Let’s include Justin Bieber in our prayers and declare complete healing for his illness in Jesus’ Name.