BREAKING
Cancer Patient Survives A ‘Death Sentence’ & Receives A Surprise From Jennifer...
TikTok Kid Preacher Feels God In His Prayer Time; “I Am Not...
“Jesus Appeared To Me Twice So That This Message Will Be Delivered...
Home Lifestyle Movies With a Message: The Karate Kid (1984) 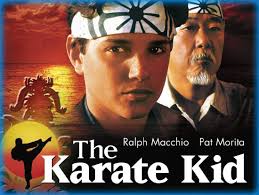 Herewith a tribute to director John G Avildsen, who passed away recently.

These days it is easy to dismiss The Karate Kid as 1980s nostalgia. However, although it now looks somewhat dated, it retains an essential innocent charm as well as a few interesting spiritual lessons. And yes, those of a certain age (including me) can’t help but get a wistful pang for more innocent times whenever viewing it.

The plot concerns young Daniel Larusso (Ralph Macchio), a boy who moves from New York to California with his mother. Fatherless, friendless, and decidedly unimpressed with his new surroundings, he finds himself targeted by a gang of bullying karate students at high school. Consequently, he is taken under the wing of the kindly maintenance man in his apartment block, Mr. Miyagi (Pat Morita), who just happens to be a karate expert.

Winning performances, a fine script, and unfussy direction from Avildsen (who also helmed the original Rocky) all result in a satisfying triumph of the underdog tale. But what makes The Karate Kid special for me (besides the delight of having my all-time-favourite Bananarama song Cruel Summer on the soundtrack) are the spiritual allegories.

For a start, there’s the quietly understated way Miyagi slowly but surely becomes a mentor to Daniel, a boy in desperate need of a father figure. Initially fixing his bike after an attack by bullies, Miyagi subsequently teaches Daniel to tend bonsai trees before eventually agreeing to karate lessons. But Miyagi’s take on karate is radically different from that of local dojo teacher Kreese (Martin Kove), who instructs Johnny (William Zabka) leader of the gang that torments Daniel.

The clash between Kreese and Miyagi forms a fascinating good-versus-evil spiritual backdrop, as each essentially fights for possession of Daniel’s soul. Miyagi teaches Daniel the reason to learn karate is so he won’t have to fight, whereas Kreese’s no-mercy indoctrination could not be more different.

Along the way, Daniel grows considerably, including in his relationship with love interest Ali (Elizabeth Shue), who also happens to be Johnny’s ex-girlfriend. Ali’s rich, snobby, country club type background contrasts with that of Daniel, but her kindness to him proves pivotal. Also, Miyagi provides amusing advice to Daniel regarding Ali, especially when he encourages him to hang out with her instead of him on his birthday (“To make honey young bee need young flower, not old prune”).

However, the most important lesson in The Karate Kid is that of discipleship. Nowhere is this more evident than the justly famous “wax on, wax off” sequence whereby Daniel cannot understand what Miyagi’s instructions to polish his cars have to do with karate. It is very easy to relate on a spiritual level because sometimes being a disciple of Jesus involves doing difficult things that we cannot immediately see the reason for. However, just as Daniel reaps the rewards of his perseverance and trust, so we can reap the rewards of placing our trust in God and following his directions.

The success of The Karate Kid led to a couple of sequels, a spin-off, and a remake, but none of them match the charm and satisfaction of 1984 original which, despite being very much a product of its time, still holds up very well today. Rocky may have won John G Avildsen his Oscar, but to be honest I have always preferred The Karate Kid.