BREAKING
At Least 1 Killed, 22 wounded In Bombing In Jerusalem by “Organized...
United Arab Emirates To Include Holocaust Education In School Criteria
US Group Wants Israel To Become Key Hub For Medical Supplies, Replacing...
Home Articles Kids in an African Orphanage Wanted to Pray for the First Lady. Very Sweet

Kids in an African Orphanage Wanted to Pray for the First Lady. Very Sweet 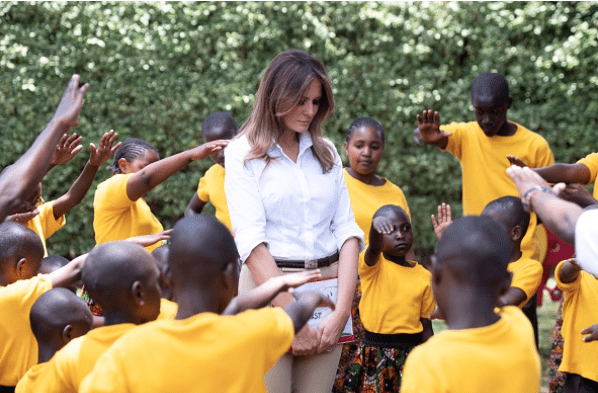 America’s First Lady, Melania Trump has just returned from a four nation solo tour to Africa where she spent time in Ghana, Malawi, Kenya and Egypt to promote her Be Best child welfare initiative.

She was warmly received especially by the children of The Nest orphanage in Kenya where she danced with the kids and read them a story. However a special moment for her had to be when the children encircled the First Lady and stretched out their arms to pray for her.

What an example these kids set. They may not know that kids in the USA aren’t allowed to pray in school. Or that as Christians we are called to pray for all in authority (including the President and his wife). They simply reached out in childlike faith.

One wonders what they prayed? The fact that they wanted to bless her is really sweet. It is us who should be praying for them, as we reach out to widows and orphans as God’s Word instructs. That is the essence of true religion.  Yet here we see these kids praying for her!

Sadly, Africa has many orphans often due to the HIV/AIDs pandemic. Malawi, another of the nations Mrs Trump visited, is a country of 12 million people of which one million are orphans.  It’s commendable that the First Lady is out there making a difference.

According to The White House: “The mission of BE BEST is to focus on some of the major issues facing children today, with the goal of encouraging children to be best in their individual paths, while also teaching them the importance of social, emotional, and physical health.”

Mrs Trump was criticised for some of her clothing choices while she was in Africa, leading her to say in Egypt that she wishes people would focus not on what she wears but what she does. And, what she does is amazing!

As @patriot101 tweeted: “We love our first lady. Her spirit of loving children and #BeBest reminds me so much of Princess Diana. My family adores Melania…”

No matter what your political affiliation, let’s follow the example of these dear kids and pray for the First Lady, her husband and family.

And, let’s pray for the orphans of Africa and support them in whatever way we can. An orphanage in Africa that GOD TV supports is the Kondanani Children’s Village. Click to read more.