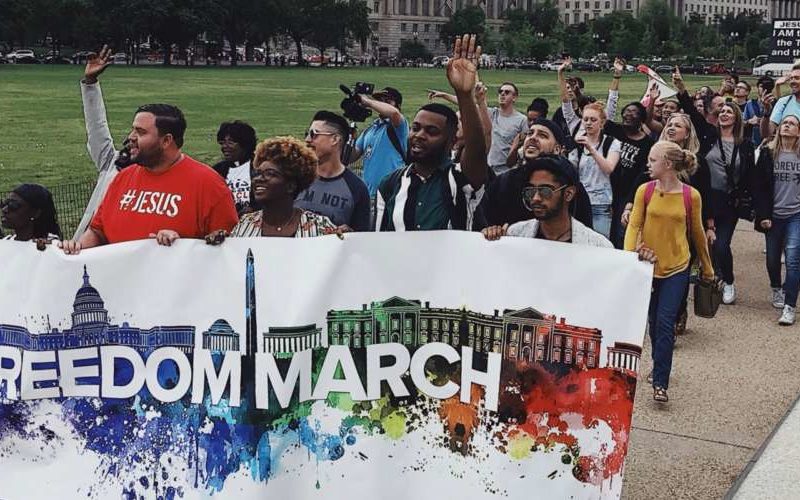 A group of people who formerly identified as LGBTQ, are preparing for the Freedom March in Los Angeles, California, on November 4, 2018. The march aims to declare the transforming power and love of Jesus Christ.

The march will have praise, worship and testimonies from people who were formerly homosexual, bisexual, and transgender. These individuals from different parts of the United States have one goal for this march, and that is to share the message that everyone can have freedom from unwanted same sex attraction, gender confusion or other life-controlling issues through Jesus Christ.

The first Freedom March in Washington DC last May, featured two survivors from the Pulse Nightclub shooting who left their LGBTQ lifestyle to have a transformative relationship with Jesus Christ.

“Going through old pictures of the night of Pulse, I remember my struggles of perversion, heavy drinking to drown out everything and to have promiscuous sex that led to HIV,” Luis Ruiz told CBN News.

A former transwoman named Jeffrey McCall, who once worked as a prostitute, founded the Freedom March. He wants the world to know that everyone can change their lifestyle no matter who they are or what their sexual orientation. Through this Freedom March, former LGBTQ people’s voices of redemption have been heard by many.

“I wanted to have a march where everyone who came out of the homosexual or transgender lifestyle could come together, to have an event to hear each other’s stories and share the freedom we have in Jesus Christ,” Jeffrey said.

“It wasn’t a gay to straight thing. It was a lost to a saved thing.”

No matter who you are, you are loved by Jesus Christ and can be saved if you put your trust in Him. In Him, there is true freedom and love. He is enough to satisfy our every longing for something that we have been searching elsewhere.

This article was written by Rhoda of the Facebook page, Christ Daily, a former homosexual who was saved by the amazing grace of Jesus Christ.

For just $10 per month you can bring the gospel to 1,000 homes. Join us as media missionaries! GIVE NOW
VIEW COMMENTS
« Unlocking Your Destiny: God Today God Wants To Eat A Meal With You And Spend Time Hearing About Your Day »