BREAKING
Israel-led Team Solves Mystery Why Lightning Strikes Fewer Times Over The Ocean...
Tourism In The Holy Land Is Soaring Back Up To Pre-Pandemic Highs
Lapid Speaks Directly To Palestinians—Offers Them “Another Way” Out Of The Ongoing...
Home Articles Like him or not, it is your duty to pray for President Donald Trump

Like him or not, it is your duty to pray for President Donald Trump 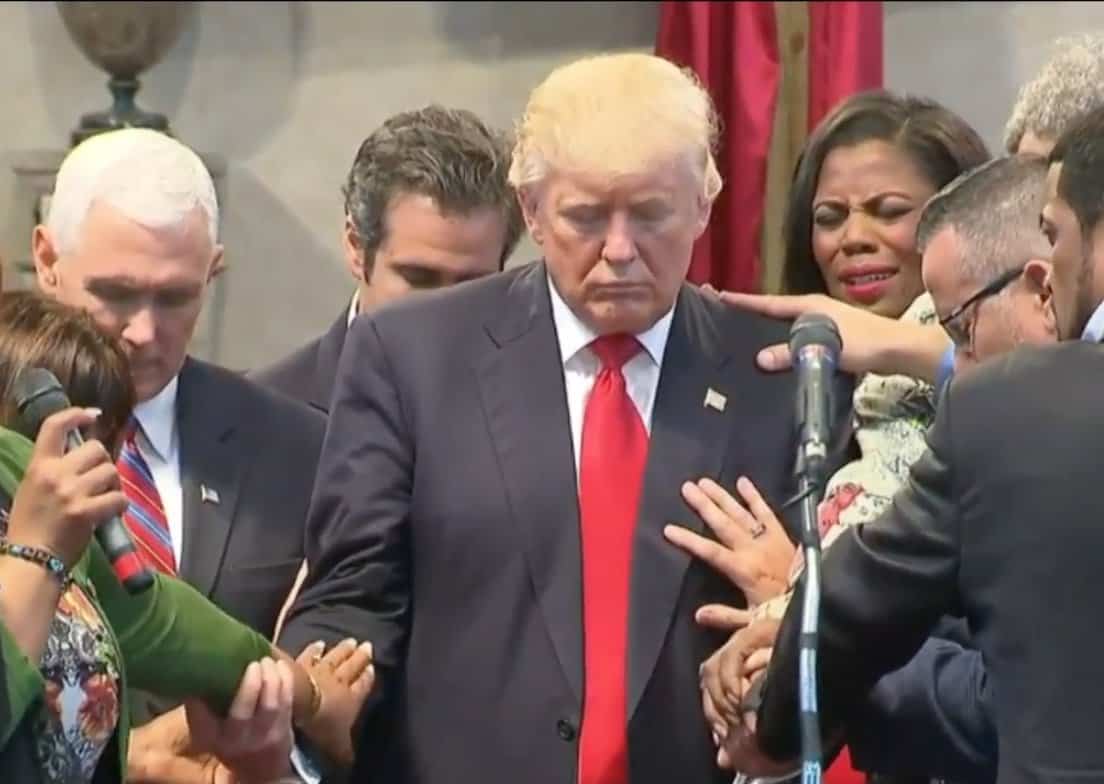 Look, I know this election season has been anything but pleasurable. The United States found itself “between a rock and a hard place.” But just because the person who is rising to power can be disagreeable at times does not mean we can just disregard him. Quite contrary, it is our Biblical duty to pray for the president-elect, and often. If you’re not praying for Donald Trump fervently then you are disobeying God’s Word. I’ll even go as far as to say that God says that every President ever has been chosen. That’s a serious statement which will lead us into some interesting discussions. But don’t take my word for it, let’s look at some Biblical examples:

Romans 13:1 – Let everyone be subject to the governing authorities, for there is no authority except that which God has established. The authorities that exist have been established by God.

Proverbs 21:1 – The king’s heart is in the hand of the LORD, as the rivers of water: he turneth it whithersoever he will.

Daniel 2:21 – He changes the times and the seasons; He removes kings and raises up kings.

But why would God choose someone like Donald Trump? He doesn’t exactly fit our definition of a moral leader.

God loves to show us His mercy and His power. If there are policies and positions that don’t exactly align with Biblical ethics, the intercession of Christians can be used in a crucial way to show His transforming power.

Remember when the Bible says that God hardened Pharaoh’s heart against the Israelites? Well, that doesn’t seem to make sense. Why would God make things harder for His people to do His plan? Here’s why: The mighty hand of God was put on display for all to see because the Israelites were not allowed to take the easy way out. If there were no one pursuing them they would’ve just walked around the Red Sea and not had the faith to walk through the middle of it!

Here’s a hard pill to swallow. Remember when Paul wrote to Timothy and said, “I exhort therefore, that, first of all, supplications, prayers, intercessions, and giving of thanks, be made for all men; For kings, and for all that are in authority; that we may lead a quiet and peaceable life in all godliness and honesty” (1 Timothy 2:1-2, KJV).

What you might not realize is that Paul wrote this at the time of Emperor Nero’s rule, the very man who would go on to have him beheaded. When Paul wrote this Christians were being executed in some of the worst ways imaginable. They were put in bloodied animal skins and thrown into the coliseum to be eaten by hungry lions while the Romans watched for entertainment. If that’s not bad enough, they were even used as human lanterns to light the streets of Rome. So, this just shows how much Paul meant what he was saying. The very last thing on their hearts or minds would have been to pray for Nero. Paul said to pray fervently for the man who wanted to tear them to pieces. Do you think you would have been able to do that? Nero makes our president-elect sound like a piece of cake!

You’re probably thinking that this is my most outlandish statement yet, but let’s look at the facts here.

1. A Trump presidency promises that prayer will be back in our schools.

Isn’t this something we’ve been fighting so hard for? Your children will no longer be punished for praying to God and their teachers will be able to pray too.

The bloodshed of innocent babies will not only be ended, it will be outlawed completely. We see babies being murdered many times throughout scripture, and every time, God has severely punished those who practiced this.

3. A Trump presidency promises to stand by Israel.

The Word of God is so clear about what our stance on Israel should be, “I’ll bless those who bless you, but I’ll curse the one who curses you, and through you all the people of the earth will be blessed.” (Genesis 12:3) Trump has been clear that he will be an ally to Israel. That alone may be the reason why he won this election.

4. A Trump presidency is surrounded by some of the most recognizable names in modern Christianity.

Have you ever taken the time to look at the men and women who Trump has selected to be his evangelical advisors? Take a look at the list and you’ll be surprised by how many you know:

5. A Trump presidency is right-handed by a strong Christian vice president, Mike Pence.

Trump has chosen someone who has consistently fought for Biblical ethics throughout his whole career and is a loud supporter of Jesus Christ. You can argue he had motives for this choice, but at the end of the day, it was still his choice and it has huge implications for our religious freedom.

In closing, I’m not asking you or even suggesting that you should like or agree with President Trump, but I am telling you that you must be praying for him and the people around him if you call yourself a Christian. The Bible is not only clear about this, but unwaveringly stern about the importance. God has a plan to use Donald Trump and prayer is the tool that we use to bring forth the plans of God. Now, more than ever, we should be praying that God so mightily touches the heart of our leaders that the United States sees a revival like never before.

Nathan Simpson is a creative consultant with a specialization in Consumer Engagement and a background in Communications. He is a recent graduate of Florida International University with a degree in International Business. Nathan has a passion for blending the creative arts into a business environment. He is from the island Barbados in the Caribbean.