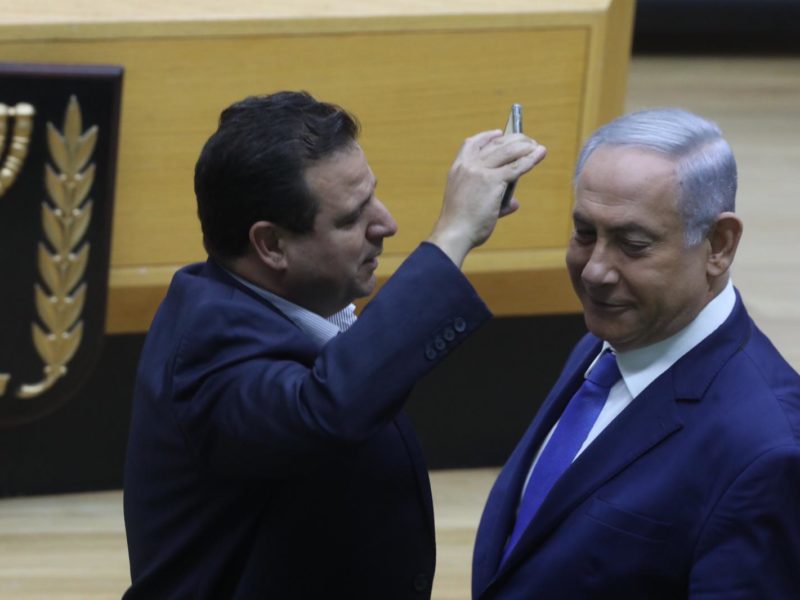 Despite failing to advance the camera bill past the Knesset’s Arrangements Committee on Monday, the Likud party on Wednesday made another attempt to pass the bill through the voting stages. The law would allow observers at the upcoming elections to use cameras in polling stations to prevent election fraud.

The bill failed to pass, despite having a majority, as it did not have the special majority of 61 or more votes, necessary for such legislation. The bill had no real chance of passing, as more than 60 Members of Knesset (MK) declared they would not back the law.

As the discussions about the bill ensued, Israel-Arab MK Ayman Odeh physically confronted Prime Minister Benjamin Netanyahu and placed a phone directly in front of his face, blocking his way to speak. Odeh did so in protest of the camera bill, which he claimed would deter Arab voters from attending the polling stations at the elections. He was then removed from the chamber by Knesset Speaker Yuli Edelstein.

The provocation was met with opposition from Likud MKs who pushed Odeah away from Netanyahu in order to allow him to speak.

“Are Liberman’s guys here? If Liberman was here and would bring his MKs to vote, if he were true to his promise only days ago, we would pass this bill by a large margin. There would be no discussion and we would prevent election fraud,” he said.

“How can anyone oppose cell-phone photography when it is everywhere these days? The public realm in Israel and abroad is full of cell-phones. What is the ‘purity of the elections?’ Transparency, and transparency can be achieved with cameras,” Netanyahu added.

Liberman responded to Netanyahu’s accusations by calling him a liar.

“Mr. Prime Minister, stop lying, cheating and disobeying the law. The only two parties who have an interest in fanning the flames, by proposing the election cheating bill you backed, are the Joint list and yourself. You have no intention of supervising the elections,” he told Netanyahu.

For just $10 per month you can bring the gospel to 1,000 homes. Join us as media missionaries! GIVE NOW
VIEW COMMENTS
« Israel to US on 9/11: We Stand ‘Shoulder to Shoulder’ with You Jarrid Wilson: An Anthem Of HOPE »