BREAKING
1,500-year-old Convent “Re-discovered” by IDF Soldiers
Hate Crimes Targeting Canadian Jews Skyrocket at “Alarming” Rate—Close to 50% in...
In Historic First, Israel-bound Flight Allowed to Cross Saudi Airspace
Home Articles Lisa Bevere And The One Thing She Would Change About Her Marriage 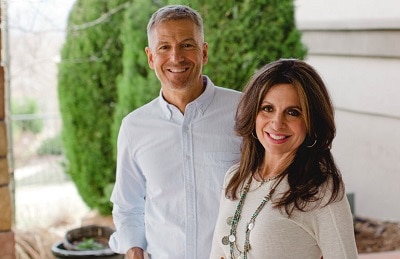 Lisa Bevere was recently asked a relatively easy question but her answer will be hard to swallow for some.

On her and husband John Bevere’s ministry website Messenger International, she shared the story. John and Lisa Bevere are both ministers, best-selling authors, international speakers, parents to four children and have sustained a thirty-year marriage. They’re both candidly – and humorously –  transparent about the struggles and the joys of a marriage that has spanned over three decades.

But it’s not their thirty-year covenant that gives them such wisdom when it comes to marriage advice; it’s their thirty-plus-years of a marriage rooted in Christ. So when Lisa said she had some regrets about her marriage, we listened up.

“Recently, John and I did a joint question-and-answer session on marriage. As the session closed, this big question came up. ‘After more than thirty years of marriage is there anything that you would have done differently?’ This one fell to me to answer. I took a deep breath and confessed, ‘I would have allowed John the right to make more mistakes, and I would have loved him more fearlessly.’

It was as though a ripple traveled through the crowd. From where I sat I saw men and women hurriedly wipe away tears; there were many deep sighs and silent nods. Fear is the greatest rival of love…equal in intensity and deadly in its capacity to corrupt.

I lived in fear and shamed him as he struggled to get free with little or no support from me. This was not approached as our challenge…it was his,” she continued.

Read Also: Lisa Bevere Weighs In On Pornography: Who’s Problem Is It?

“Part of the reason I did not help was because I was beginning to feel the weight of my own past bear down on me and consequently believed I didn’t deserve any better than what I was experiencing. On some level judging him made me feel safe. If he didn’t change, I didn’t have to forgive him.

One night, in all of my anger and brokenness, I cried out to God, ‘I will forgive him when he changes.’

As far as I was concerned, all trust was broken between John and me, and I didn’t want to be disappointed yet again. God answered my declaration with a question:

‘Good. I need you to forgive John so he can change.’

He even gave me the words to say: ‘I believe you want to change and I forgive you.’

This was in stark contrast to my normal script, which read, ‘I will believe you are sorry when you change.’

This way of thinking was so far removed from anything I had known that I knew it was God leading me. When I extended this unconditional mercy to John, the healing began for both of us. He was able to move out of the darkness of shame and into the light, where he found freedom from his bondage. This shift in perspective was a turning point. I could trust the unchangeable God.”

Do we trust the unchangeable God?

Married or single, this is for all of us to search our hearts. Where are we pulling away because of anger or shame? Are we holding back parts of heart, from people of God, out of fear? Lord, show us where we need freedom and give us the strength and grace to forgive others… and ourselves.