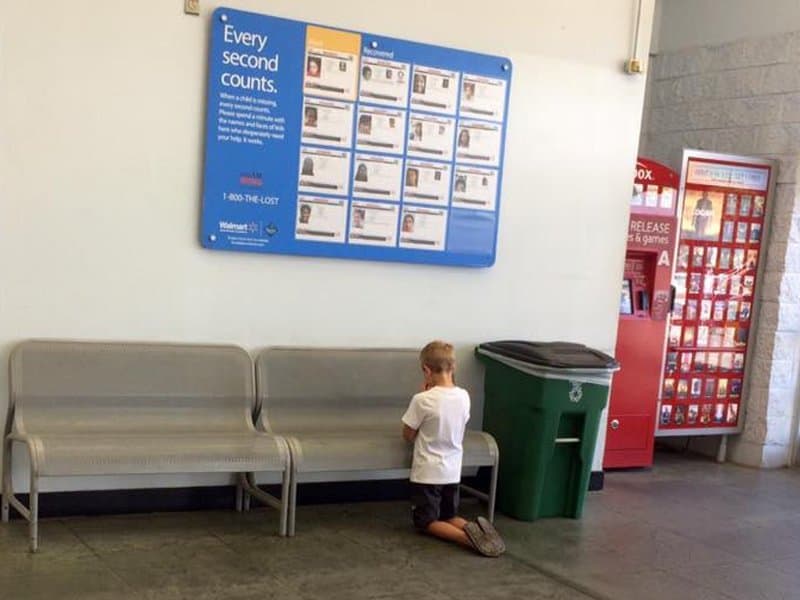 A little boy was found kneeling in front of a poster of missing children, at Walmart. When his mother discovered what he was doing, everyone was brought to tears!

While they were shopping the boy’s mother suddenly realized that he was no longer with her. The panic she felt was the same feeling any parent would have when they realize their child has suddenly disappeared.

She ran around looking for him and found him in a familiar position. He was kneeling in front of a wall where pictures of missing children were posted. It was then she realized her son was praying.

89.5 KVNE, a Christian radio station in East Texas posted a picture of the little boy and his act of compassion and intercession was soon shared far and wide.

The caption says: “I had to run into Walmart. I turned around to make sure my son was next to me. Instead of finding him by my side I found him kneeling in front of the missing children board praying. #amazing #trainupachild”

This mother and son have inspired thousands of people with their story!

One comment on the post included: “God not only has a plan for this child’s life, He also has a purpose! When the Holy Spirit speaks and you obey as he did, you and those you pray for are being interceded for in the Heavenly realm. Thank you for sharing your faith in public! Always listen to God’s voice! Blessings abound.”

What an example of building a new generation of Kingdom seekers! Share if you agree!

For just $100 per month you can bring the gospel to 10,000 homes. Join us as media missionaries! GIVE NOW
VIEW COMMENTS
« Man Who Threw 5-Year-Old Boy Off Balcony At Mall Of America Sentenced Must Watch: Stephen Curry And Viola Davis Release The Trailer Of Their New Documentary Entitled “Emanuel” »