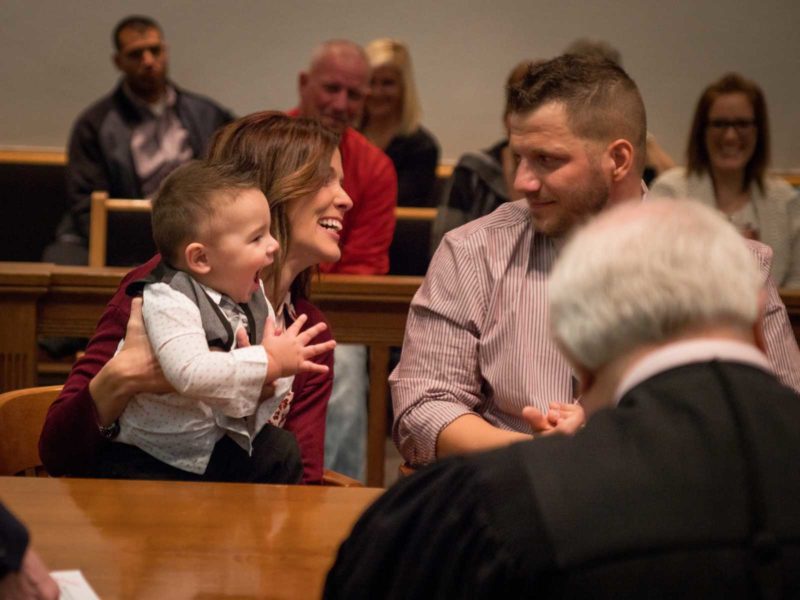 If there is one thing that couple Mandi and Tyler Palmer learned in 2017, it’s that family isn’t about DNA. It’s about love! The two realized this after they finally got what they had been praying for – a child of their own.

Mandi and Tyler had always dreamed of building a family of their own.  However, when they learned that they could not have their own biological children, the two were left devastated.  Because of Mandi’s history of Crohn’s disease, she had to go through dozens of surgeries.  This greatly affected her ability to give birth to a child.

Meanwhile, Tyler also had his own share of hardship.  After serving in Afghanistan twice, Tyler suffered Post Traumatic Stress Disorder.  Fortunately, their conditions did not stop them from clinging on to their dream of building a family.

“When [Tyler] got out of the army, we moved to Perrysburg, Ohio and decided it was time to start a family,” Mandi said.  “We both knew we wanted our own family so badly, but didn’t know what God had planned for us.

It turns out that God has called them to be foster parents.  They went through months of intense training, paperwork, and home inspections.  It was all worth it in the end when they finally became licensed foster-to-adopt parents.

“We were scared but we knew God was pulling at our heartstrings and telling us that this is what we needed to do,” Mandi explained.

Then the couple met little Hunter, who was only 8 days old when he arrived in the Palmers’s home.  They got a call on the same week they received their license so they hurriedly prepared to give the infant boy the home he needed.

It took 16 months of fostering before the courts finally permitted the couple to formally adopt Hunter.  On December 18, 2017, Mandi and Tyler appeared in court to make the adoption official.  Right after the couple signed the legal documents, the judge announced to everyone the adoption decree.  He also presented Hunter’s new legal name: Hunter Palmer.

Everyone was happy but nothing could beat Hunter’s reaction. Clapping his hands, Hunter, who is now a toddler, faced Tyler and called him “Dad!”  It was a heart-melting scene.  It was as if Hunter clearly understood what was going on.

Our hearts are forever changed because we now know a true and genuine love,” Mandi said.  “We know that he will forever be safe with us and, most importantly, will always know what love is.

For just $100 per month you can bring the gospel to 10,000 homes. Join us as media missionaries! GIVE NOW
VIEW COMMENTS
« 92 Year-Old Grandma Rebuked Burglar By Using The Word of God Netanyahu: ‘Terrorists with drones a ‘real nightmare’’ »