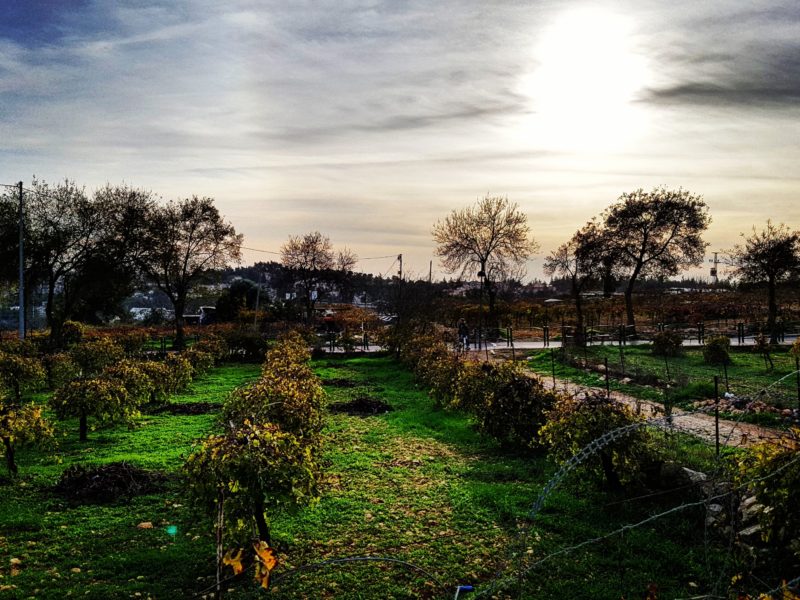 The Battle of Beit Zechariah, which took place 2,000 years ago during the Maccabean Revolt, is one of sacrifice and bravery.

On a clear autumn afternoon last week in Gush Etzion, TPS took a trip back in time, standing among the vineyards and rolling hills of Gush Etzion in Judea, in a spot almost exactly where the battle took place.

Standing next to a famous 600-year-old oak tree, which sits opposite the settlement of Alon Shvut, Aryeh Routtenberg, a renowned Jewish historian at the Kfar Etzion Field School, told the story of the Maccabean battle to save Jerusalem and the Jewish people.

A battle, he says, which echoes the battle for Gush Etzion that took place in 1948 just prior to and during the War of Independence.

“More than two thousand years ago, in 164 BCE, Elazar the Maccabee sacrificed himself for the Jewish people,” explained Routtenberg. “The Greeks came from the south of where we stand now – they had surrounded Beit Tzur. The battle took place between Beit Zechariah and Beit Tzur.

“Beit Zechariah is just north of this tree,” he said pointing at the old oak.

According to the book of the Maccabees, Judah the Maccabee had laid siege to [Greek Fortress] Akra in Jerusalem [which overlooked the Temple Mount], but he lifted his siege and “marched to the narrow passageway to our left,” which was the direct road to Jerusalem and directly in the path of the Syrian-Greek army who were marching to Jerusalem.

He explained that the Greek Army used elephants and infantry for battle, and that “Elazar charged towards one of the elephants” and he thrust a spear into the elephant’s belly and pierced, killing it, but the dead elephant fell upon Elazar, and he too was killed.

Routtenberg highlighted that the Maccabees were victorious against the Greeks during the Battle of Beit Zechariah and this eventually led to their victory in recapturing Jerusalem and rededication of the Temple.

“After winning the battle [in Jerusalem], Judah was asked by Syrian commander Lysias, ‘what can we do to bring peace?’ He told them that what he would like is the return of Jewish autonomy, and allow the practice of Judaism as was done before,” he said. “Lysius answered Judah, ‘I realize you have been upset by the decrees of Antiochus V, we will abolish these decrees and we will return Jewish autonomy in the Land of Israel.’”

The TPS team also visited Beit Zechariah itself, which today forms part of a small Arab village called Hirbeit Zakariya. The tomb of the Prophet Zechariah stands in a small building and in the building is the entrance to a mosque because he was seen as a prophet in Islam as well.

Articles and photo by Ilanit Chernick/TPS