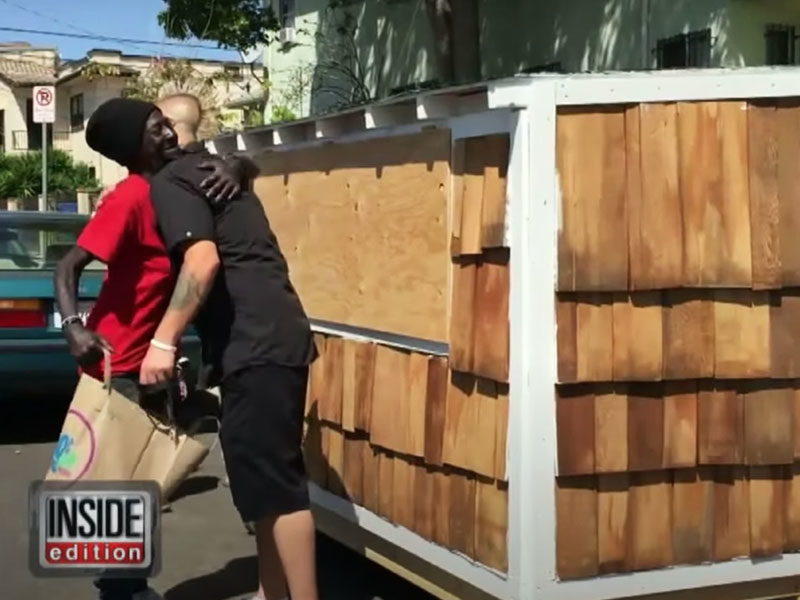 Everyone in south LA knows Irene “Smokie” McGee . She is a 60-year-old homeless woman that the neighborhood cares deeply about.

However, after the sun goes down, Elvis Summers noticed that people seemed not to care about her wellbeing anymore.

According to Shareably, Irene met Elvis when “she knocked on his door asking for recyclables to cash in for money.” He thought, like any homeless person, she would have at least a box to sleep in at night. However, he was wrong. The elderly woman didn’t have any kind of protection at night. She had only been “sleeping in the dirt every single night.”

The elderly woman’s circumstance broke Elvis’ heart. So he did something about it so Irene could have a good night’s rest. He felt really compelled to help her and ended up building a tiny home for her to live in.

“I started asking more questions about her to see what her story was,” Elvis told ABC News. “I learned she didn’t have anything, not even a cardboard box. She was literally sleeping in the dirt and I just wanted to make her a place where she could feel comfortable and at least get a good night’s sleep.

“So, I asked her ‘what would you think if I built you a mini house’ and I think she thought I was crazy. I saw online that people were building these tiny homes. I had done construction before, so figured that’s easy — I could do that.”

“We are all human,” he said. “It could be somebody’s sister, grandmother, or somebody’s kids out there. She was very grateful. She’s very sweet and she said ‘no one’s ever done anything for me.’ When I first met her, until now, she looks like a different person. She seems legitimately happy now.”

The city supported the mini home Elvis built for Irene as long as it was moved to a different spot every 72 hours.

Elvis spent about $500 to build the tiny home. Five days later, he showed the finished product to the woman.

Unfortunately, in November 2016, Irene passed away. And although she left this world, we’re just grateful that her life was changed because of Elvis’ kindness. The warmth that she gave will always remain.

Elvis’ kindness didn’t stop on Irene’s passing. Since then, his small project has flourished into something much bigger. He has since started an organization called ‘Starting Human‘ where he crowdsourced over $50k.

Elvis continues to build mini homes for the homeless. His heart is clearly radiating the love of Jesus, very selfless and extraordinary!

For just $100 per month you can bring the gospel to 10,000 homes. Join us as media missionaries! GIVE NOW
VIEW COMMENTS
« YouTube Stars Credit Jesus For Surviving A Horrible Hit-And-Run Incident Prayer For Today »