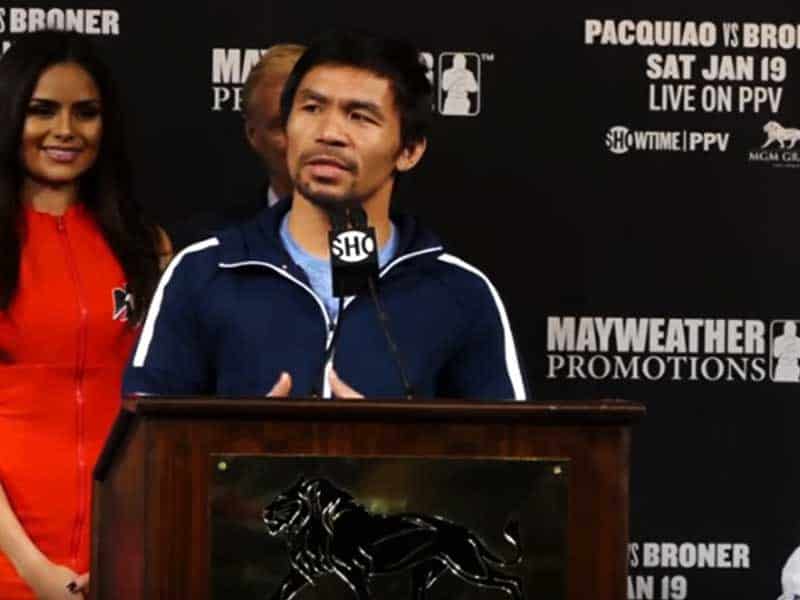 The fight between Manny Pacquiao and Adrien Broner last at MGM Grand in Las Vegas recently was remarkable. Manny successfully defended his WBA Welterweight title once again in a unanimous decision. It’s no surprise his fellow countrymen are celebrating while Manny started off with a Facebook post thanking God for this victory.

ALSO READ: Manny Pacquiao After Winning The WBA Fight: “Thank You Lord For The Victory!”

However, three days before Manny and Adrien got on the boxing ring, both gave their last speech at a final press conference. During the conference, Manny never forgot to use the platform God has given him to glorify Him.

He started his message with a grateful heart to the Lord, “First of all, I would like to thank God for this privilege today that we have a press conference.”

Then appreciating every individual organizing the event, the promotions, the media press, his fans, and everyone who has given them a favor for the event, he mentioned how overwhelmed he was for the unexpected support he had received.

Manny also highlighted that the fight was nothing personal. In fact, he showed interest in wanting to be friends with Adrien, his opponent.

Moreover, before ending his speech, Manny took the opportunity to share God’s Word. Overawed by God’s favor at the age of 40-years-old still fighting in the boxing sport, he shared a Bible verse taken from Jeremiah 9:23-24 where it says:

Manny boldly declared God’s Word in front of the media with millions of people around the world watching. He is truly a Man after God’s own heart and we praise God for his life!

For just $100 per month you can bring the gospel to 10,000 homes. Join us as media missionaries! GIVE NOW
VIEW COMMENTS
« YOU Are Deeply and Unconditionally LOVED God Desires to Heal You More Than You May Think »