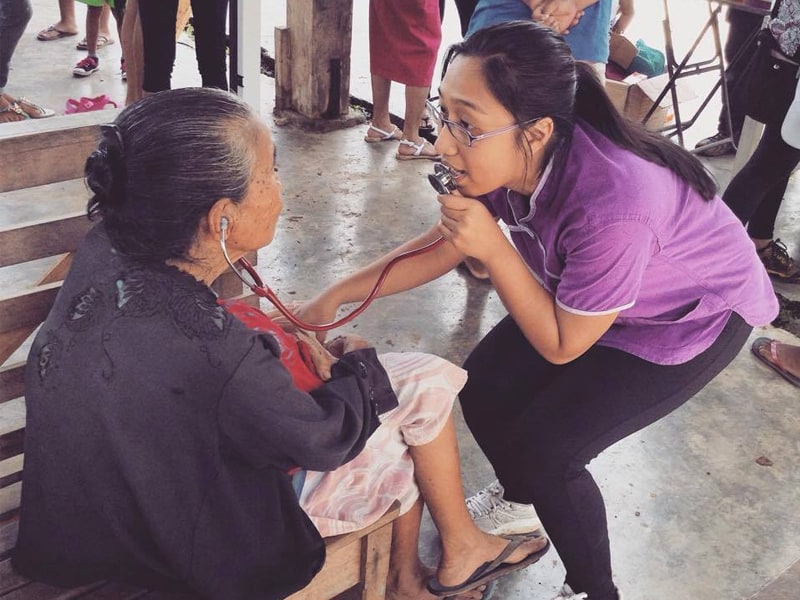 This medical student was ridiculed for using her stethoscope incorrectly after a photo of her with an elderly woman went viral – until the surprising reason behind what she was doing was unveiled!

The woman in the viral photo is Aiah de Paz, an MD/PhD graduate in Molecular Medicine at the University of the Philippines, Manila. She recently graduated but about four years ago, in the summer of 2015, a photo of her using her stethoscope incorrectly went viral and was ridiculed by many. When she revealed the context behind the photo, everyone was praising Jesus for what she has done.

A stethoscope and the Great Commission

Aiah and her team were doing medical missions in a community in Palawan, the Philippines when the photo was taken. The elderly woman in the photo was brought to her after a medical consultation because she wanted to hear the Gospel. However, she was hard of hearing, but the Lord made a way for His Gospel to be heard.

“The Lord reminded me of this trick I saw in a Korean medical-romantic telenovela [television show]. So I took my stethoscope and used it as a hearing aid,” Aiah said.

The elderly woman was finally able to hear Aiah and the doctor asked her if she knew Jesus.

“When I first asked her if she knew Jesus, she looked confused and said, ‘Ah! That’s the surname of a friend of mine,’” Aiah recalled.

Aiah, though amused at the woman’s response, was shocked that she didn’t know the name of Jesus as God. Aiah took the time to explain who Jesus is and share the message of salvation. The Holy Spirit gave the elderly woman understanding and she decided to receive Christ as her Lord and Savior.

“So I shared starting from the Creation up to the point when the Creator became our Savior. Praise God because she prayed to receive Christ,” Aiah said. “My heart leaped with joy when she said in her own words to Jesus, ‘Please save me.’ She also expressed how much she wants to learn more about God’s Word.”

The photo of Aiah and the story behind the photo has resurfaced again and this time, it’s not to ridicule her, but to share the power of Jesus Christ! Who would’ve thought that a stethoscope could be an instrument of the Gospel?

Read also: Deaf Man Instantly Healed After Being Prayed For By A Pastor In An Airport