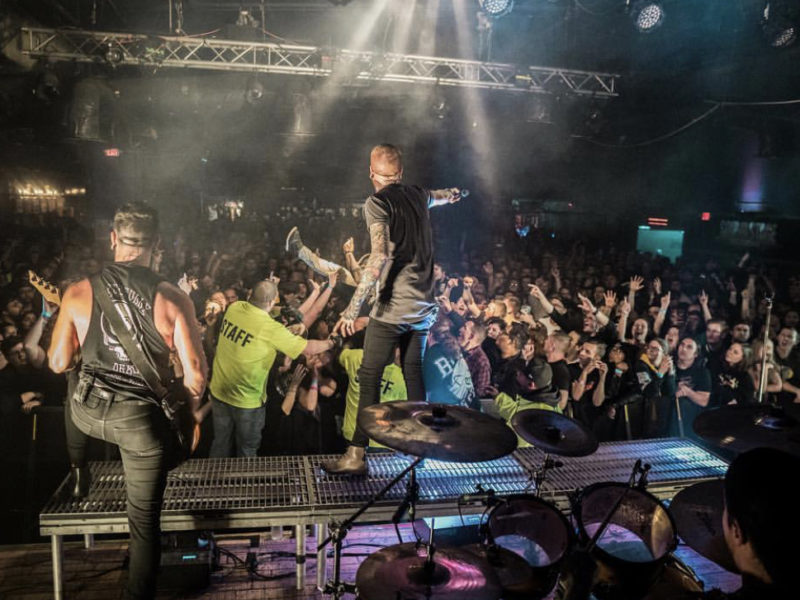 Who is Memphis May Fire?

Memphis May Fire is an American rock band from Nashville, Tennessee. The band is known for their melodic breakdowns and heavy music… packing a heavy message. A message of hope and love for everyone.

While not everyone will enjoy their heavy rock sound, a ton of people will hear the message and hope of Jesus for what could be the first time through their music. And that is worth supporting.

Memphis May Fire is currently on tour with rock bands Atreyu and Ice Nine Kills where I went to see them play at The Buckhead Theater in Atlanta, Georgia to find out what all the buzz was about. What I saw that night during Memphis May Fire’s set was so much more than I expected.

The crowd was diverse – people of different ages, races and all types of people and the band had a huge connection with their audience… Everyone seemed to come together for the concert and there was pure worship in the atmosphere. Now, the other acts were not Christian, but Memphis May Fire is 100% faith-based and sing about Jesus and His love for others but they don’t classify themselves as a Christian band… Rather as a band of Christians with a message bigger than life.

The band has a new album out, entitled “Broken” which is topping the rock charts and rotating on the radio now.  It features the song “The Old Me” which is about overcoming anxiety and depression.

Matty Mullins – Frontman and lead singer, Matty has a story to tell and a message to share in the lyrics he writes and the music he and his band produce. Matty’s message consists of a hope and love found in Jesus, his battles with anxiety and depression and other challenges people around the world are going through.

Speaking about his song, “The Old Me” he explains, – “What feels like a war between good and evil, loathing the person I become mentally when it consumes me and trying to remember what life was like before I lived with the symptoms. Ultimately hoping to one day become that person – ‘The Old Me’ – again.”

Matty has written with Matthew West, featured Jordan Feliz on his album and is also a huge fan of CCM in his personal life. He grew up listening to artists like the Newsboys, Jars of Clay, Michael W Smith and others. Not only does he sing and write music, but he is also the owner of On Point Pomade, a hair product company and his wife, Brittany leads a non-profit, Beneath The Skin which focuses on mental health and helping people get past their dark times.

Kellen McGregor – Kellen is the founding member of the band and longest-serving musician. He plays lead guitar, sings backing vocals and writes music. He is also an engineer, producer and fitness guy along with being a hockey goalie! Kellen recently got married and has a message of love and hope for this generation as he shares through his nonprofit HeartSupport.

Corey Elder –  Corey has been playing bass guitar for the band for over a decade.

Samuel Penner (Touring Rhythm Guitar Player) Samuel has been traveling with the band since 2017.

Check Memphis May Fire out NOW!

For just $100 per month you can bring the gospel to 10,000 homes. Join us as media missionaries! GIVE NOW
VIEW COMMENTS
« Kari Jobe Shares About Her Visit To The White House Jamal Bryant Set To Breathe New Life Into Atlanta Megachurch »