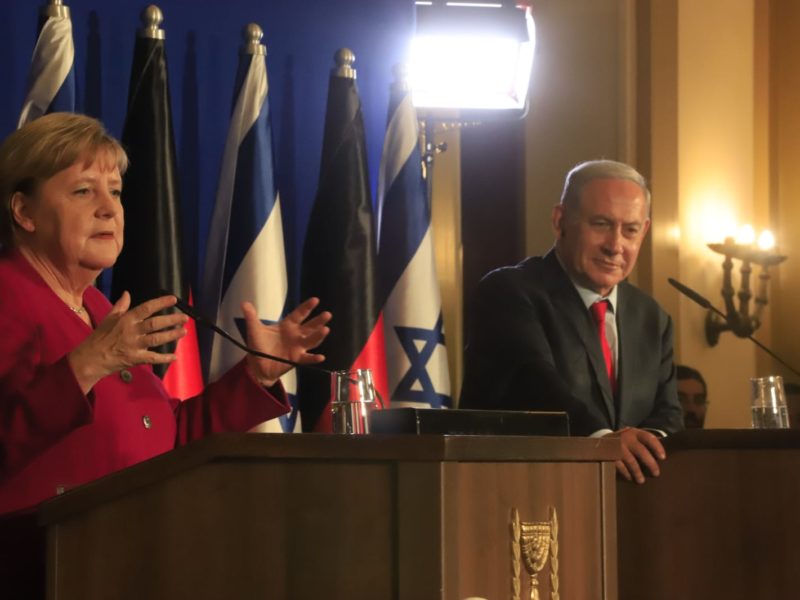 Speaking about the Iranian nuclear threat, Netanyahu told Merkel that it is the “billions of dollars” transferred from Europe following the Joint Comprehensive Plan of Action, which allow Iran to continue its nuclear aspirations.

“[Those] funds didn’t go to benefit Iranian citizens, but to Iran’s war machine, which is bent on conquering the entire Middle East,” Netanyahu asserted.

The Israeli premiere thanked his German counterpart for her strong stance against anti-semitism, as well as her standing up for Israel’s security.

Speaking about the security situation on the Gaza Strip, Netanyahu blamed Palestinian Authority Chairman Mahmoud Abbas (Abu Mazen) of attempting to drag both sides in Gaza into war by perpetuating the humanitarian crisis in the Strip. According to Netanyahu, Abbas purposely delayed the transfer of funds from the PA to Gaza in order to put pressure on Hamas. “As a result, pressure is put on Hamas, and Hamas attacks Israel,” said Netanyahu, also adding a message to Hamas by which, if they think they can attack Israel as a result of a crisis, “They are making a very big mistake, and will be dealt a very severe blow.”

Merkel also addressed the situation between Israel and the Palestinians, telling Netanyahu that Germany “prefers the two-state solution,” over any other possible solutions.

Earlier, Netanyahu and Merkel attended a roundtable meeting with Israeli and German business people, where the sides discussed the potential for bilateral cooperation in innovation by creating joint platforms for the development of technologies in the fields of – inter alia – water, green energy and agriculture.

“This is a wonderful opportunity to have a meeting between Israeli and German innovators. The last meeting that Chancellor Merkel and I had we decided to have this roundtable and have this delegation meet with Israeli counterparts. I think, just from a few examples that we saw here, I think there are tremendous opportunities,” Netanyahu said at the meeting, adding that “Germany is one of the world’s great economies. It has great science, great innovation, great industry and a wealth of experience.”

For just $10 per month you can bring the gospel to 1,000 homes. Join us as media missionaries! GIVE NOW
VIEW COMMENTS
« This Christian Made an Unrepentant Serial Killer Cry for the First Time IDF Ombudsman Issues Dire Warning on State Of Readiness For War »