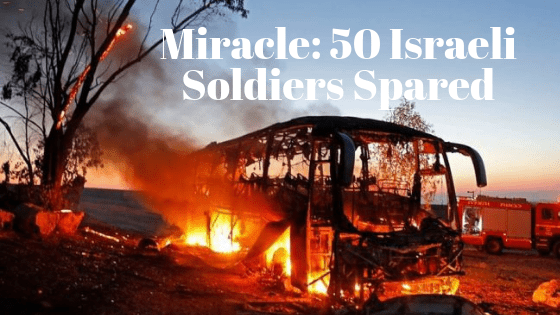 During Hanukkah, the winter holiday that commemorates the Hebrew victory over the Syrian dictator, Antiochus Epiphanes, we say, “nes godal kara poe,”which means, “a great miracle happened here.” It is fitting that 50 Israelis soldiers were singing one of the great Hanukkah songs, when they encountered a miracle of their own.

Many of you have seen the carcass of the burning bus that took a direct hit from an anti-tank missile from Hamas. This is a severe escalation. Not since 2014 has Hamas used one of their Russian-made, anti-tank missiles. For the most part, Israel has had to contend with tens of thousands of horribly inaccurate rockets. They have no guiding system beyond point and shoot. And when one is actually on target, our Iron Dome has a 90% accuracy rate of taking them down before they can cause damage.

However, an anti-tank missile is much more accurate and the video of it hitting the bus is chilling. No one inside could have survived. However, here is what you may not have heard.

Minutes before the missile hit its mark, the bus was full,with 30 barely-passed-their-teens, IDF soldiers. They had no idea that any minute, their bus would become an inferno. They began to sing the famous Hanukkah song that speaks of the miracles that took place as God protected Israel. It boldly proclaims: “Jerusalem, our capital, the heart of Israel.”

Moments after all 50 had exited the bus, a Hamas missile hit it, turning it instantly into a ball of fire. One soldier, who was standing close to the bus, was seriously injured. Fortunately, doctors expect him to survive. Had they been in the bus at the time, all of them would have surely died or have been seriously burned. Of course, Hamas aired a video of the explosion, declaring that they killed and injured many soldiers. In fact, it was the Arab bus driver who set the record straight.

“God loves [Israel]. I just let off 50 soldiers from the bus. A minute later the bus was hit. 60 seconds earlier and you would have had 50 dead soldiers.” —Arab Bus Driver

This bus had an Arab driver. In his shock while being treated (thank God he lived), he said, "God loves you. I just let off 50 soldiers from the bus. A minute later the bus was hit. 60 seconds earlier and you would have had 50 dead soldiers." https://t.co/m7hhJRl35A

A Blessing for Both Sides

I cannot even imagine the response from Israel, if the soldiers were still on the bus. This miracle not only benefited Israel, but Gaza as well. Many Palestinian lives were saved. It makes one wonder if Hamas waited until the bus was empty, before firing. They know full well that the only thing restraining the IDF is the fact that, with all their rockets, they have caused only a few deaths.

The situation is still tense. Israel and Hamas have agreed on a ceasefire. This caused our Hawkish Defense Minister to resign from the government—taking his party with him—bringing Netanyahu’s coalition to the smallest number possible, just 61 members. We will surely have new elections soon.

One thing that is troubling is how Israel’s army allowed an unarmored bus carrying soldiers to get within the scopes of Hamas. This was extremely reckless and, no doubt, it is being discussed amongst the senior leaders of the IDF.

For just $100 per month you can bring the gospel to 10,000 homes. Join us as media missionaries! GIVE NOW
VIEW COMMENTS
« Elections Loom as Coalition Hangs by a Thread Amazing Testimony: God Protected Pastor’s Home From California Wild Fire »