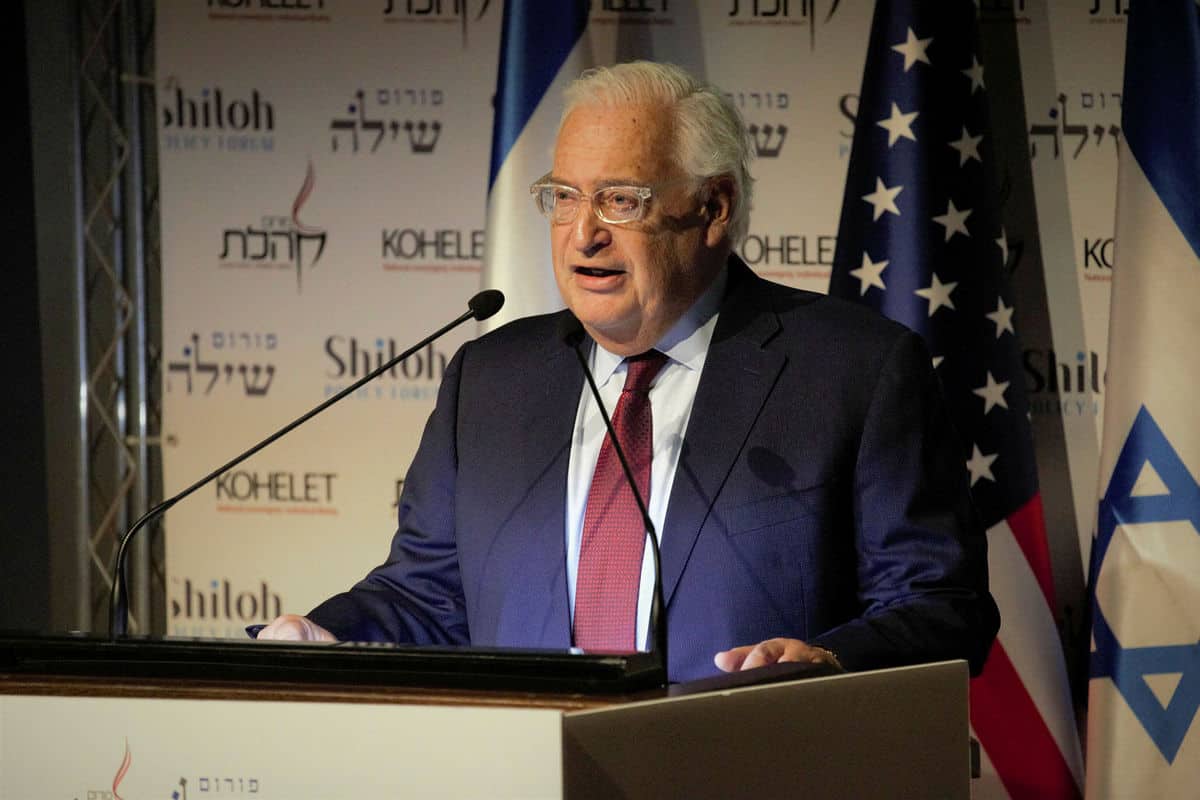 Israeli leaders in Judea and Samaria offered mixed reactions to US Ambassador to Israel David Friedman’s announcement that a declaration of Israeli sovereignty in the region was weeks away, while some warned of “modern ghettos.”

Freidman told the Israel Hayom daily that the American Embassy in Jerusalem was preparing for the recognition of Israeli sovereignty in parts of Judea and Samaria in the coming weeks, as stipulated by the US’ Deal of the Century peace plan.

“When the mapping process ends, when the Israeli government agrees to freeze construction in area C that is not designated for sovereignty, and when the prime minister agrees to negotiate with the Palestinians on the basis of the Trump plan – and he has already agreed to that from day one – we will recognize Israeli sovereignty in areas that according to the plan will become part of it (Israel),” he stated.

Shlomo Ne’eman, head of the Gush Etzion Council, was hesitant to fully endorse the American plan.

He congratulated Friedman, “a Zionist and principled ​​person” who is working with Prime Minister Benjamin Netanyahu to “realize the immediate process of applying sovereignty in Judea and Samaria.”

“Hopefully, in the near future, we will be able to fulfill the dream of the ages and erase the notorious green line from the state’s map,” he stated Tuesday.

However, “just as powerfully as we are fighting for the fulfillment of the dream of sovereignty, we will fight against every attempt to create modern ghettos for our remote communities,” he said.

“If applying sovereignty violates our core values ​​- I give up on it now! We have established one of the world’s most magnificent enterprises over 50 years without sovereignty, we have a lot of strength and patience to move on to achieve the national goals in their entirety,” he concluded.

However, Oded Revivi, head of the nearby Efrat municipality, believes that “one bird in the hand is better than two in the tree.”

This historic move is a test not only for the new government but is “also a test for the right-wing in Israel and the settlers’ leadership, whether they prefer one bird in the hand or two in the tree,” he said.

“The moment has come,” and just as Zionist leader Haim Weizmann welcomed the decisions of the San Remo conference a century ago, although not all the Zionist dream came true, and as David Ben-Gurion knew how to take the UN decision and establish a state within challenging borders, “that courage is now required by the right-wing and settler leadership to say yes despite the challenges and to declare Israeli law in Jewish communities in Judea and Samaria,” Revivi said.

“In my view, we are in a formative period that if we miss, we may lose the opportunity for generations. I say yes to the plan!” he concluded.

Yochai Damri, head of the Har Hebron Council, stated that while he “welcomes” the plan and supports Friedman in his efforts in “bringing historical justice,” the plan “has red lines.”

He expressed concern about leaving Israeli enclaves surrounded by Arab territory, “and unfortunately we have not received clarifications about this; it is impossible to abandon thousands of families at the mercy of the terrorists.”

He further warned that “the establishment of an Arab terrorist state within the Israeli territories is also a clear danger, and no government in Israel should agree to its establishment.

He further opposed the “delivery of historical Bible lands to a foreign terrorist entity. This is an unrealistic, unethical step, and experience shows it is also a clear danger to the state’s residents.”

He demanded the government provide “clarifications for a program that will affect our future.”

The coalition agreement between the Likud and Blue and Blue and White parties states that the government can commence with steps to declare sovereignty in parts of Judea and Samaria from the beginning of July, subject to the requirements delineated in the Deal of the Century peace plan and the Trump’s Administration’s agreement.

Much remains unclear on how Israel will progress with the implementation of this plan.