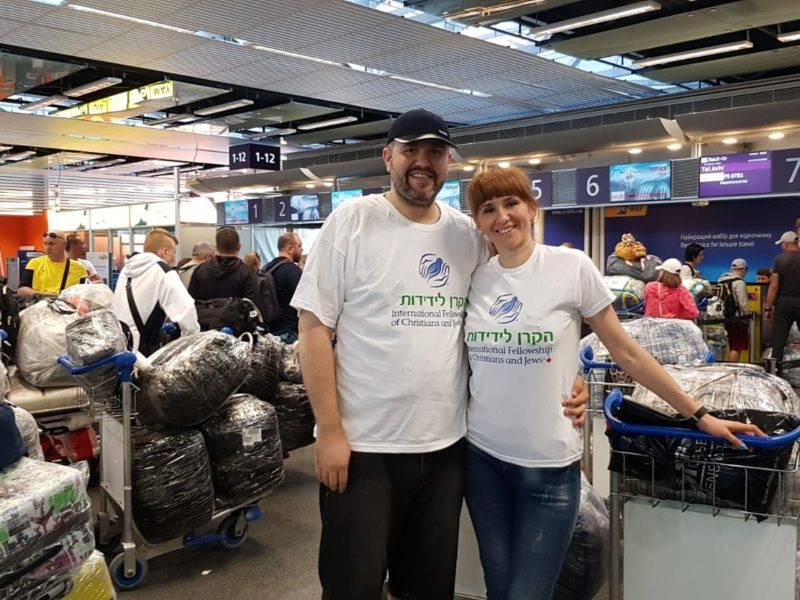 A further 241 Ukraine Jews have arrived in Israel from Ukraine, escaping the advent of anti-Semitism the country has been experiencing.

These latest Olim (new immigrants) join the 345 who also flew in during May 2019, from 16 different countries, including Uzbekistan, Uruguay, Brazil and France.

All of the Olim came on flights that were organized by the International Fellowship of Christians and Jews (IFCJ), known in Israel as Keren L’Yedidut.

Anti-Semitism was the primary factor that influenced many of the new Olim to move to Israel.

“The last few years in Ukraine were particularly difficult,” Alexander Moroz said on arrival in Israel. “I experienced a number of anti-Semitic incidents that were personally directed at me.”

He shared that “an existential fear” led him to change his Jewish last name, Blaker, to a more neutral last name, Moroz, and that hastened his decision to make Aliyah [moving to Israel].

Alexander, 40, immigrated to Israel with his wife Katrina, 36, and her mother, Yevgenia 76.

Both Alexander and Katrina expressed excitement and optimism for what lies ahead for them in Israel.

The dream of Aliyah

“The dream of Aliyah has been in my heart for 40 years. Our hope has not been lost, and today I am making this dream a reality,” Alexander said.

Katrina shared that they have been married for several years, but regretfully still have no children, and they hope that their “new life in Israel will lead to a blessed transformation, and that soon we will have the joy of holding an Israeli child. One way or the other, our new life in Israel is exciting for us, and we are full of expectation and hope for what is to come. Changing one’s location also changes one’s luck.”

Alexander, Katrina and Yevgenia will settle in Haifa, and they hope to find jobs in their fields of expertise. Alexander is an engineer and Katrina is a math teacher.

IFCJ President Yael Eckstein remarked that “most recently, it has been a particularly challenging time for world Jewry. As anti-Semitism increases, we also see a spike in the number of people who are interested in making Aliyah through The Fellowship. The people of Israel are a strong people, and this morning alone we were blessed with 241 immigrants who are adding a great light of hope for tomorrow.”

Written by Aryeh Savir of TPS

For just $10 per month you can bring the gospel to 1,000 homes. Join us as media missionaries! GIVE NOW
VIEW COMMENTS
« You and Me Have History A Tick Called Bitterness. How You Can Expose It »