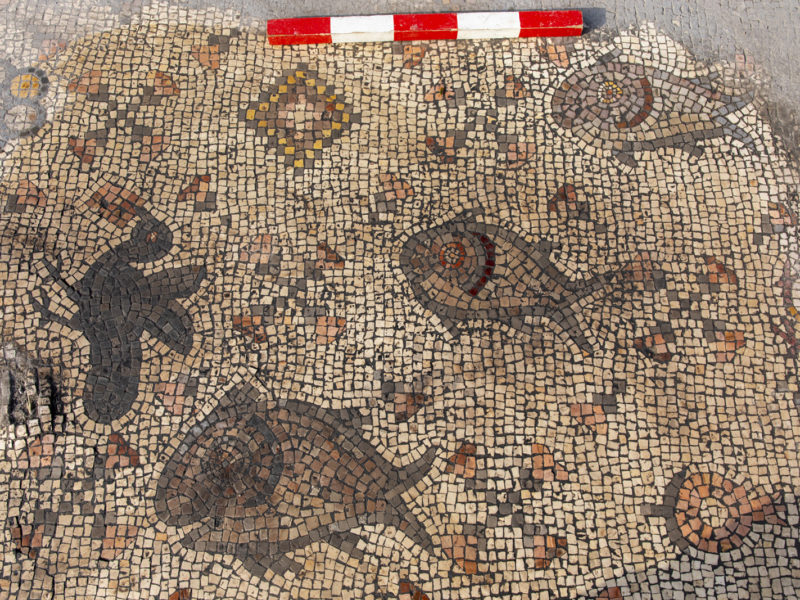 A colorful mosaic, well-preserved and laden with decorations, including depictions of baskets with loaves of bread and fish, was recently exposed in an archeological excavation of the “Burnt Church” in Hippos, near the Sea of Galilee. The mosaic possibly depicts a miracle recounted in the New Testament.

According to the archeologists leading the dig from the University of Haifa, the depiction of baskets with loaves and fish in the mosaic, given the location of the church overlooking the Sea of Galilee, points to a connection to the “Feeding the Multitude” miracle performed in the area by Jesus as depicted by the New Testament.

“There can certainly be different explanations to the descriptions of loaves and fish in the mosaic, but you cannot ignore the similarity to the description in the New Testament: for example, the fact that the New Testament has a description of five loaves in a basket or the two fish depicted in the apse, as we find in the mosaic,” said Dr. Michael Eisenberg, head of the excavation team in Hippos on behalf of the Institute of Archaeology at the University of Haifa.

Hippos, which overlooks the Sea of Galilee from the top of a mountain approximately 2 km to the east, was the central city in the region around the eastern Sea of Galilee and the south of the Golan during Roman and Byzantine times.

The site has been carefully excavated for two decades by an expedition from the Institute for Archaeology at the University of Haifa.

A few weeks ago, the archeologists exposed the Burnt Church, built between the fifth and sixth century AD, which was probably burnt during the Sasanian conquest at the beginning of the seventh century.

According to Dr. Eisenberg, those who crafted the mosaic intentionally created an extraordinarily saturated and colorful image, including vibrant geometric patterns and depictions of birds, fish and fruit throughout the mosaic.

In some of the baskets, the researchers have found five or more loaves in different colors, along with the fish, and other detailed images.

For just $100 per month you can bring the gospel to 10,000 homes. Join us as media missionaries! GIVE NOW
VIEW COMMENTS
« In The Search Of The Best College For Me: Canada Christian College Hebron’s Arabs Irate as Netanyahu Visits the City »