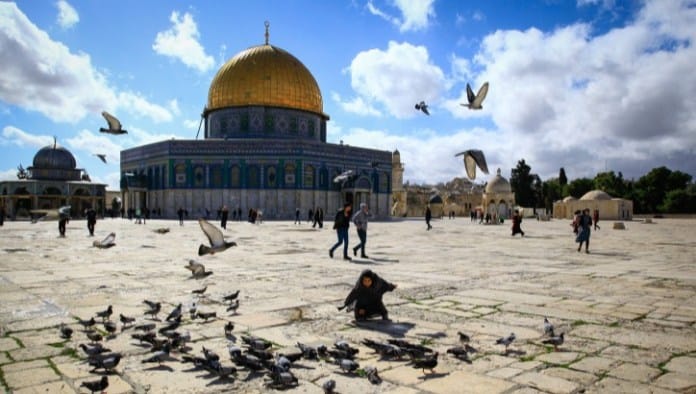 A new pit was uncovered on Sunday on the Temple Mount under a large tile that fell into it, sparking excitement over the prospects of its historic significance.

The Israel Police updated the Israel Antiquities Authority (IAA) on the unusual finding so that it can investigate the finds inside the pit and the reason for its opening.

Assaf Fried, a spokesperson for the Mate Hamikdash organization, called on the Israeli authorities to prevent the Muslim Waqf from sealing the new opening by “pouring vulgar and destructive concrete,” as it has done in similar cases in the past.

The IAA “must conduct an orderly rescue excavation at the site, excavate the find, and disclose its contents to the general public,” the organization, which advocates Jewish presence at the holy site, demanded.

“The finds on the mountain reflect 3,000 years of Jewish activity in the place, and every pit dug in the place can shed light on thousands of years of Jewish history. Whether it is a cistern from the days of Herod, or an opening of a cave from the days of King Solomon, escape caves he built at the bottom of the mountain, among other things to hide the Ark of the Covenant during a hostile onslaught,” he explained.

The Muslim Waqf has been conducting extensive renovations at the site, possibly causing the exposure of the hole.

Salvation work at the site by Israeli archeologists and volunteers had led to the exposure of half a million artifacts from periods ranging over thousands of years of Jewish history.

For just $100 per month you can bring the gospel to 10,000 homes. Join us as media missionaries! GIVE NOW
VIEW COMMENTS
« Arson Terrorism Ignites 21 Fires In Israel’s South Remembering Chadwick Boseman Who Recently Lost Four Year Battle »