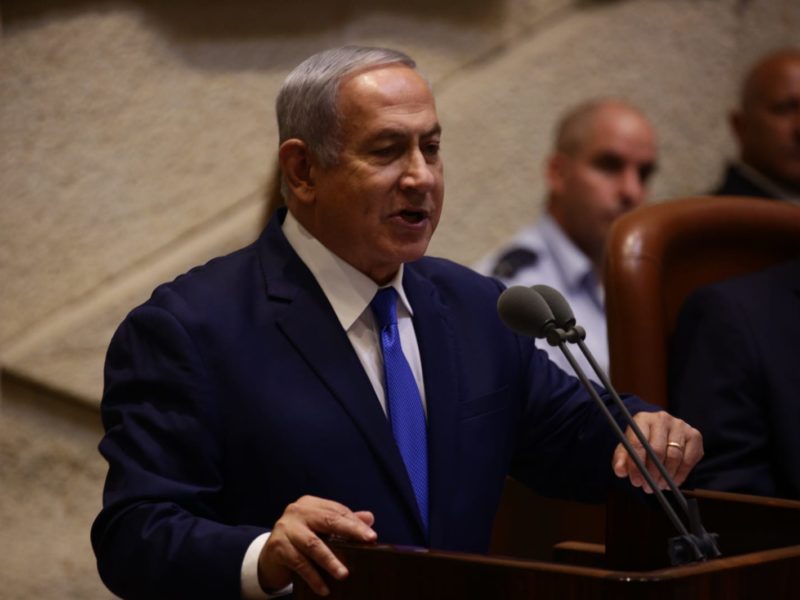 Israel is ready to renew negotiations with the Palestinian Authority, but the Palestinians are not ready for peace with Israel, Prime Minister Benjamin Netanyahu said Monday in a speech opening the winter session of the 20th Knesset.

“When [Palestinian Authority Chairman Mahmoud Abbas] Abu Mazen sees the murderers of Jews as martyrs and heroes, when he stands steadfast in his refusal to recognize Israel as the nation state of the Jewish people, then, I’m afraid, there is no foundation for real peace,” Netanyahu said.

“I have yet to hear from him a condemnation of the cruel and shocking murders of Kim Yeheskel and Ziv Hajbi, “ Netanyahu added, referring to last week’s terrorist attack at the Barkan industrial zone. “Abu Mazen continues to demand a nation state that is free of Jews, yet he attacks our Nation State Law. Abu Mazen adopts laws that hand down the death sentence to those that sell land to Jews and laws that reward the killers of Jews. The obstacle to peace is not us, but them.”

In a wide-ranging speech, Netanyahu praised the economic achievements of his government and said that Israel’s diplomatic relations were “flourishing in an unprecedented fashion” despite the warnings of the opposition that it faced isolation.

“Hundreds of heads of state, ministers and senior members of parliament come to Israel every year. They are in wonder at our military prowess and intelligence capabilities. We continue to methodically develop both those capabilities and they provide us with enormous diplomatic strength.”

Israel, under his government, Netanyahu said, had strengthened the alliance with the United States to new levels. “We have achieved this,” he said, “not by bowing our heads or making concessions. We achieved this by standing up for our diplomatic and security interests.”

Despite recent tension, Netanyahu said Israel had also strengthen ties with Russia. “I have frequent contacts with President [Vladimir] Putin… that allow us to deal with the complex challenges in our region. It is a very important connection for Israel,” he said.

On that note, Netanyahu added that Israel is “continuing to act against Iran in Syria and we will continue to push it back.”

For just $100 per month you can bring the gospel to 10,000 homes. Join us as media missionaries! GIVE NOW
VIEW COMMENTS
« Thousands of Souls Decided to Follow Jesus and Got Baptized in the Philippines Palestinian Baby First-Ever Recipient Of A Heart Transplant From Israeli-Jewish Child »