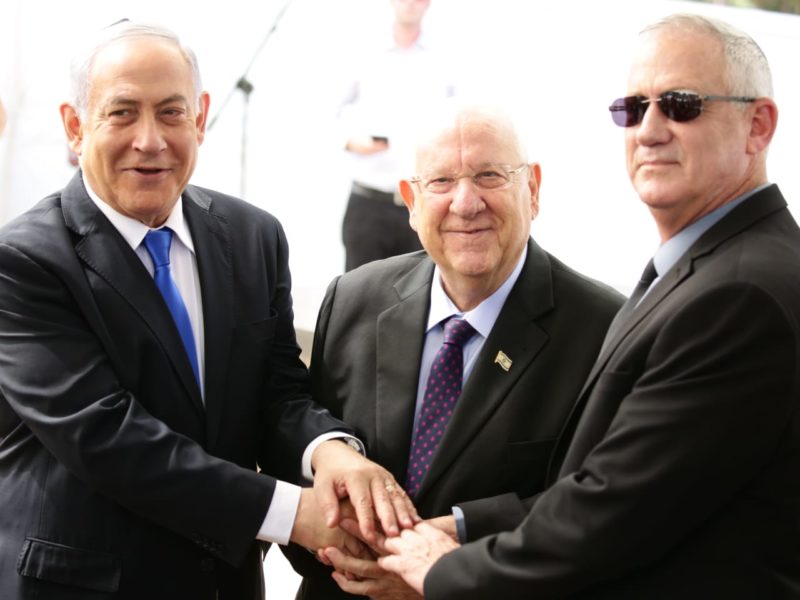 Prime Minister Benjamin Netanyahu publically called on Member of Knesset (MK) Benny Gantz, leader of the Blue and White Party, to meet and discuss the terms for establishing a broad unity government.

After 95% of the votes were counted, Blue and White has 32 seats and Netanyahu’s Likud received 31. The two leading parties are caught in a deadlock and neither has a majority to easily establish a coalition.

As a result of the apparent political impasse, Netanyahu has called upon Gantz to form a broad unity government, consisting of a majority of the parties.

“During the elections, I called for the establishment of a right-wing government. But unfortunately, the election results show that this is not possible. The people have not decided between the two ideological blocs. Therefore, there is no choice but to form a broad unity government, as wide as possible, made up of all those who cherish the State of Israel,” Netanyahu stated Thursday.

Netanyahu met on Wednesday with right-wing parties to form a bloc ahead of the possible unity coalition negotiations. The heads of the New Right, Bayit Yehudi, Shas and United Torah Judaism signed an agreement they would not enter negotiations or join a coalition separately.

“We must establish a broad unity government today. The people expect us, both of us, to show responsibility and work for cooperation,” Netanyahu told Gantz in a statement.

“That’s why I call upon you, Benny, to meet today, at any time, to advance this move which is the order of the day. We must not allow a third round of elections, and there is no reason for it, and I am against it. The order of the day – a broad unity government, today,” Netanyahu concluded.

Gantz and the Blue and party will have to break two major campaign promises if they are to accept Netanyahu’s proposal. The party leaders said they would not join a government with Netanyahu, and promised a secular and liberal government which will not be possible with Shas or UTJ.

Netanyahu’s team has contacted Gantz’s team to facilitate a meeting between the two of them as early as today.

The two rivals met briefly on Thursday morning during a memorial for the late President Shimon Peres, during which they shook hands and President Reuven Rivlin welcomed Netanyahu’s called for unity.

For just $10 per month you can bring the gospel to 1,000 homes. Join us as media missionaries! GIVE NOW
VIEW COMMENTS
« GOD TV Mobile Wallpapers 🍁 Fall Edition Israeli Researchers Discover Evidence of Biblical Kingdom of Edom in South »