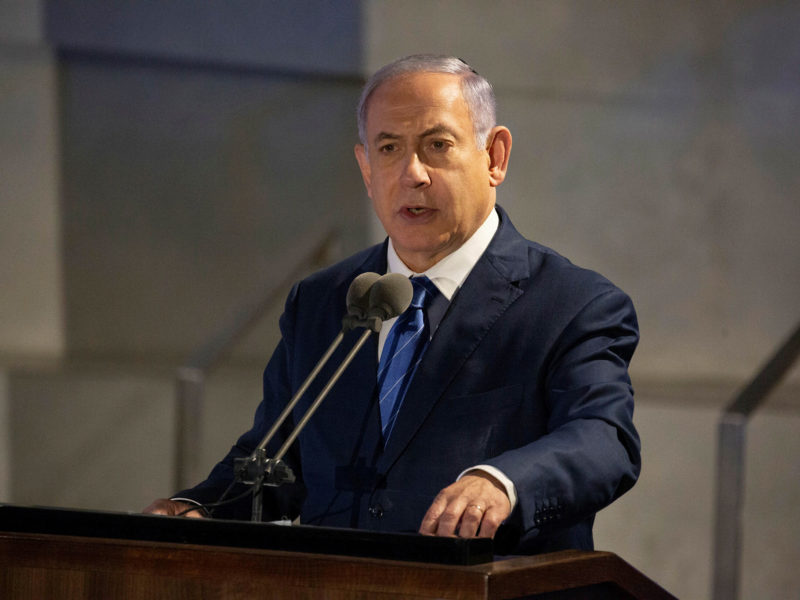 Prime Minister and Defense Minister Benjamin Netanyahu on Monday called on the international community to “act immediately” and force Iran to cease its attacks on Israel.

“Iran is working on a broad front to carry out murderous terrorist attacks against the State of Israel,” Netanyahu warned.

“Israel will continue to defend its security however that may be necessary. I call on the international community to act immediately so that Iran halts these attacks,” he stated.

The IDF’s intelligence on Sunday released surveillance footage of Iranian Quds Force operatives in Syria on Thursday carrying an armed drone that they intended to use for an attack on Israel. They did not execute the attack on Israel.

The Israeli Air force (IAF) on Saturday night launched an attack on a compound in Syria from which the plot to launch an attack on Israel was being staged, killing Hasan Yousif Zbib and Yasir Ahmad Dahir, Lebanese Shiite militia operatives who were behind the attempt to attack Israel with drones.

The was planned and commanded by Iranian Quds Force Commander Qassem Soleimani.

US Secretary of State Mike Pompeo spoke with Netanyahu on Sunday regarding the Israeli airstrikes in Syria. He stated after the conversation that he “expressed my support for Israel’s right to defend itself from threats posed by the Iranian Revolutionary Guard Corps and to take action to prevent imminent attacks against Israeli assets.”

“We discussed how Iran is leveraging its foothold in Syria to threaten Israel and its neighbors,” he added.

Netanyahu noted that Israel would strike IRGC targets threatening Israel, wherever they are located.

Vice President Mike Pence spoke with Netanyahu on Monday and said that the US “fully supports Israel’s right to defend itself from imminent threats.”

“The United States fully supports Israel’s right to defend itself from imminent threats. Under President Donald Trump, America will always stand with Israel!” he stated on Twitter.

However, the United Nations called on all parties to display “maximum restraint.”

The IDF on in high alert on all fronts, while the IAF is reportedly active in four arenas – Lebanon, Syria, Iraq and the Gaza Strip.

For just $10 per month you can bring the gospel to 1,000 homes. Join us as media missionaries! GIVE NOW
VIEW COMMENTS
« Returning To Nazareth Claudio Freidzon: A Passion For Glory »