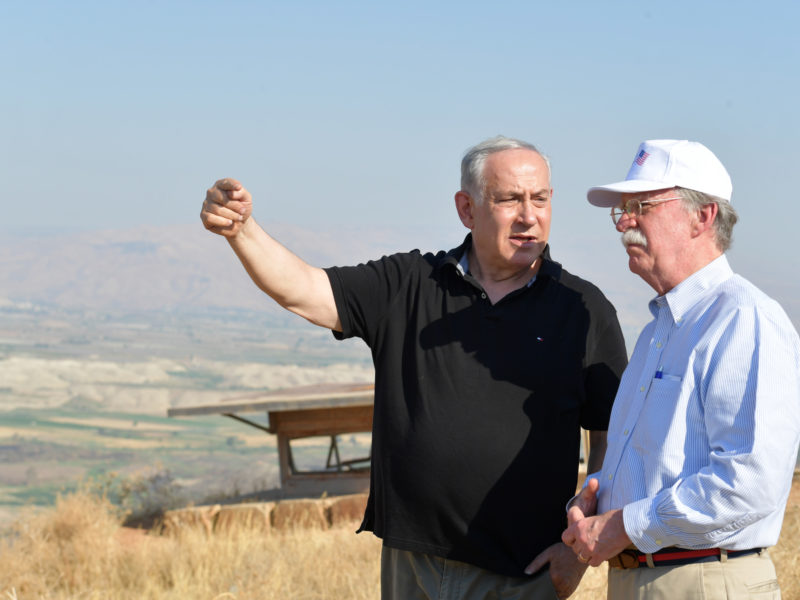 Prime Minister Benjamin Netanyahu and US National Security Adviser John Bolton, on Sunday toured the Jordan Valley and took a helicopter expedition of the Jerusalem district, the security fence and the Jordan Valley.

Bolton is in Israel for what Netanyahu termed as “a historic and unprecedented” meeting in Jerusalem between the national security advisers of the US, Russia and Israel.

Bolton’s visit in Israel takes place just days before the US-sponsored “Peace to Prosperity” workshop in Bahrain’s capital is slated to commence. The summit is considered a major step towards the unveiling of President Donald Trump’s peace plan for the Middle East, and the Palestinian Authority (PA) has called on Arab countries and Arab businessmen to boycott it.

In comments he made during the tour, Netanyahu stated that he “cannot understand how the Palestinians before they even heard the plan rejected it outright. That’s not the way to proceed.”

As for Israel, “I would say that we’ll hear the American proposition, hear it fairly and with openness.”

Relating to the place he was standing at, he said that “for those who say that for peace to be established Israel has to leave the Jordan Valley, I’ll say that’s not going to bring peace, that’s going to bring war and terror. We’ve been there and we don’t want to be there again.”

“Under any peace agreement, our position will be that Israel’s presence should continue here for Israel’s security and for the security of all,” he underscored. “We believe that peace is coupled and dependent on security. Our presence here guarantees security, and therefore guarantees peace.”

Bolton seconded Netanyahu’s statements when he said that “without security, there is no peace, there is no long-lasting peace. And I just think it’s too bad, Prime Minister, that more Americans can’t come to locations like this, see the geography, understand its significance, understand how it affects Israel’s critical security position, and explain why Israel has taken the view that it has.”

“I can assure you that President Trump will take the concerns that you have voiced so clearly over the years very much into account as we go forward on this,” he added.

For just $100 per month you can bring the gospel to 10,000 homes. Join us as media missionaries! GIVE NOW
VIEW COMMENTS
« EXPOSED: Hamas Has a ‘Sleeper’ Inside UNRWA Unemployment in Israel Continued to Drop in May »