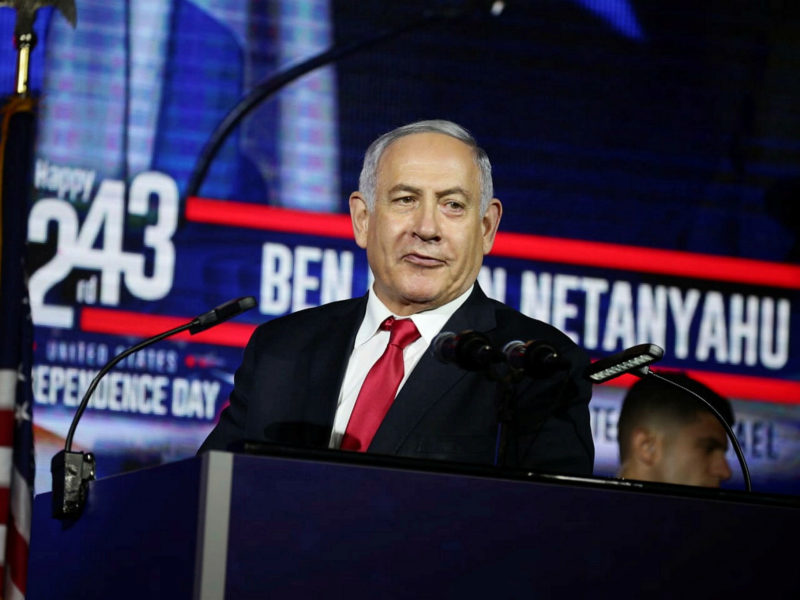 Prime Minister Benjamin Netanyahu welcomed the diplomatic shift in the Arab world in Israel and described it as “encouraging.”

Speaking on Tuesday night at the Jerusalem International Convention Center during an event to mark the American Independence Day, Netanyahu thanked the government of Bahrain for hosting the Peace to Prosperity economic workshop last week “in order to advance peace and prosperity.”

Netanyahu related to a statement by Bahraini Foreign Minister Khalid Al Khalifa who stated in his first interview with the Israeli media last week that “Israel is a country of the Middle East. Israel is part of the heritage of this whole region. The Jewish People have a place amongst us. The Israeli public needs to trust that there are countries in the region that do want to have peace and do encourage the Palestinians to do it.”

“That’s a change that should be applauded,” Netanyahu declared

“It was encouraging to see numerous Arab governments participate in the workshop, despite Palestinian efforts to undermine it,” he noted.

The Peace to Prosperity Economic workshop in Manama, Bahrain, concluded last week. A delegation of 12 Arabs from the Palestinian Authority (PA) attended the summit and have been facing threats from the PA.

The US-sponsored workshop is considered a major step towards the unveiling of President Donald Trump’s peace plan for the Middle East. The PA had called on Arab countries and businessmen to boycott it.

Touching on the PA’s boycott, Netanyahu said that while “the worst thing you can do in a speech is to repeat a cliché. I’m going to repeat a cliché. The Palestinians never miss an opportunity to miss an opportunity. They just did another one. Again, the Palestinian leadership held the prosperity of their own people hostage to their ideology against Israel.”

He expressed hope that “the Palestinian leadership chooses a different course. I hope that instead of rejecting President Trump’s peace initiative, even before they’ve seen it, they should keep an open mind about it. That’s certainly what I’m going to do.”

He concluded by saying that he “looks forward to working with President Trump and his administration to advance peace, prosperity and security. Security comes first but peace and prosperity can come too if there’s a willingness finally on the Palestinian side to abandon the goal of destroying Israel and once and for all to recognize the Jewish state. That’s the problem and that’s the solution.”

For just $100 per month you can bring the gospel to 10,000 homes. Join us as media missionaries! GIVE NOW
VIEW COMMENTS
« PA Increases its Budget for Terrorist Salaries by 12% in First Half of 2019 ‘They Overcome Politics and Geography to Save Children’s Lives’ Dr. Mike says of Israeli Doctors »