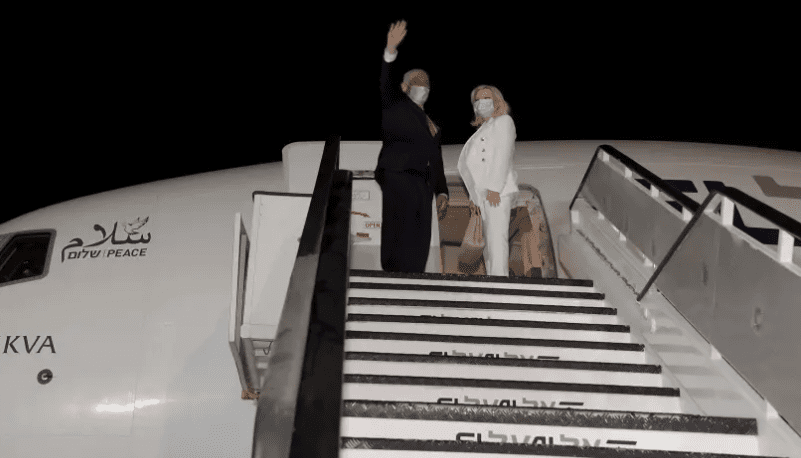 Prime Minister Benjamin Netanyahu on Sunday night took off with his family and an Israeli delegation to Washington ahead of the historic signing of normalization agreements with the United Arab Emirates (UAE) and Bahrain, “to set this historic change in motion,” as he termed it.

The historic event will take place on Tuesday at the White House.

The countries have committed to begin the exchange of embassies and ambassadors, start direct flights between their countries, and launch cooperation initiatives across a broad range of sectors.

Netanyahu said at the beginning of the Cabinet meeting earlier in the day that he had a conversation with President Donald Trump and King Hamad of Bahrain.

“We now have two historic peace agreements, with two Arab countries, which were established in one month. I am certain that we all welcome the new era. We are at the threshold of a new era,” he declared.

He noted that the “great excitement” felt in Israel is “also reflected in the very great excitement in Bahrain and the UAE among the public at large. There truly is a great change here.”

The UAE and Bahrain are the first Arab nations to normalize relations with Israel in more than 25 years.

The UAE is the first major Arab state to recognize Israel since the Israel-Jordan Peace Treaty was signed in October 1994.

Announced on August 13, the Abraham Accords is the first between a Gulf state and Israel and is expected to lead to similar agreements with other Arab countries, possibly Oman, Morocco or Saudi Arabia.

For just $100 per month you can bring the gospel to 10,000 homes. Join us as media missionaries! GIVE NOW
VIEW COMMENTS
« Watch the Feast of Tabernacles LIVE from Jerusalem! More Than 500,000 Have Signed The Petition To Remove ‘Cuties’ For Allegedly Sexualizing Children »