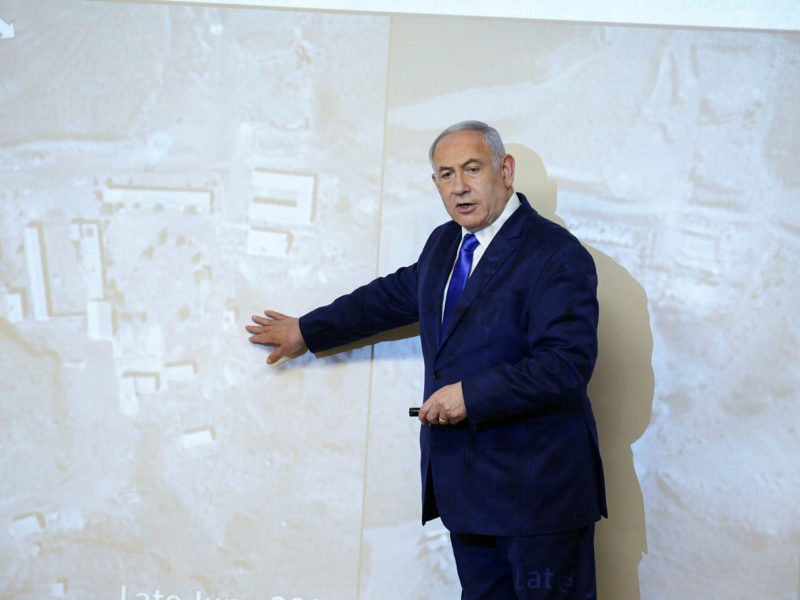 Prime Minister Benjamin Netanyahu exposed new data which shows that Iran’s has hidden elements of its nuclear program from the world – another secret nuclear site.

In April 2018, Israel publicly exposed Iran’s secret Project Amad to develop nuclear weapons, and its nuclear archive, a trove of more than 100,000 documents obtained by the Mossad, which revealed that Iran was developing five nuclear warheads as early as 2003.

Later on in September, while addressing the United Nations, Netanyahu exposed Iran’s secret nuclear warehouse in Turquzabad, which Iran used for storing materials and equipment for its secret nuclear program.

Speaking at the Foreign Ministry in Jerusalem on Monday evening, Netanyahu revealed that even before the exposure it the UN, “Iran knew that we were on to them so they cleared the site. They cleared it of these capacities, and then they actually covered up the site. This is an actual cover-up. They put gravel on it to try and hide their traces. But they didn’t.”

However, the International Atomic Energy Agency (IAEA), the UN’s nuclear watchdog, found traces of uranium that Iran hid at these sites. Netanyahu noted that these Iranian actions are “a direct violation of the NPT, the Non-Proliferation Treaty,” of which Iran is a signatory.

Earlier on Monday, the IAEA announced that it had demanded that Iran answer its questions regarding these violations and Iran refused.

Displaying maps, Netanyahu revealed “yet another” secret nuclear site, exposed in the archives that the Mossad brought from Tehran. He said that at this site, near Abadeh, south of Isfahan, Iran conducted experiments to develop nuclear weapons.

When Iran realized that Israel had uncovered the site they destroyed it, Netanyahu said.

“They just wiped it out. They wiped out the site. Here they conducted nuclear experiments for nuclear weapons. This is the site after they understood that we were on to them,” he said, indicating the maps. “They destroyed the evidence or at least tried to destroy the evidence.”

He called on the international community to “wake up, to realize that Iran is systematically lying,” and to join President Donald Trump’s sanctions “to exert more pressure on Iran.

The only way to stop Iran’s march to the bomb, and its aggression in the region, is pressure, pressure and more pressure” he said.

“The possessor of REAL nukes cries wolf—on an ALLEGED ‘demolished’ site in Iran,” he said on Twitter. Netanyahu and some American officials headed by john Bolton, whom he referred to as B Team, “just want a war, no matter innocent blood and another $7 TRILLION.”

These revelations came only a day after Tehran announced that it was recommencing with its building and activation of advanced uranium enrichment centrifuges, in direct violation of the nuclear deal.

For just $10 per month you can bring the gospel to 1,000 homes. Join us as media missionaries! GIVE NOW
VIEW COMMENTS
« What Authority Are We Given As Believers? Israel Minister: ‘World Must Unite and Curb Iran’s Race to Nuclear Power’ »