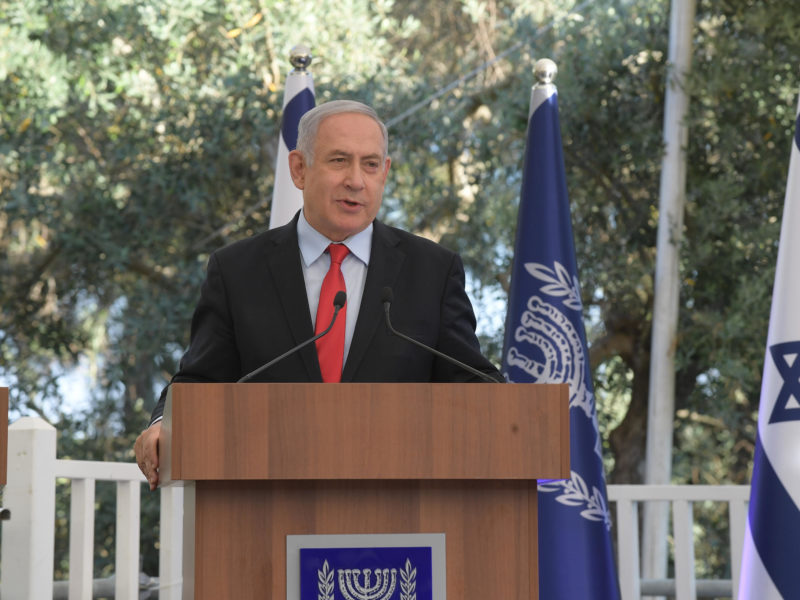 Prime Minister Benjamin Netanyahu slammed Iran’s announcement that it has officially breached the 2015 nuclear deal with world powers and called on the European countries to take action.

“The next stage which has been declared pertains to the 3.67% limit which will come into effect in the second phase,” Zarif threatened while slamming the Europeans for their inaction on confronting sanctions leveled by the US against the Islamic Republic.

Speaking on Monday at the President’s Residence in Jerusalem at a ceremony to honor outstanding IDF reserve units, Netanyahu said that “Iran announced that it has violated its explicit commitment. Iran is taking a significant step toward producing nuclear weapons.”

Iran requires over a ton of enriched uranium to produce a nuclear bomb.

“When we exposed the secret Iranian nuclear archive, we proved that any nuclear agreement with Iran is built on one big lie. Now even Iran acknowledges this. Soon will be revealed additional proofs that Iran has been lying this whole time,” Netanyahu declared.

He was relating to Israel’s April 2018 revelation of a trove of more than 100,000 documents obtained by the Mossad from a secret warehouse in southern Tehran. The documents include classified maps, charts, photographs, blueprints, videos, and more documenting the Islamic Republic’s secret nuclear weapons program called Project Amad.

Netanyahu reiterated his pledge that “Israel will not allow Iran to develop nuclear weapons.” He further called on “all the European countries: Uphold your commitment. You committed to act the moment Iran violated the nuclear agreement. You committed to imposing the automatic sanctions set out by the Security Council. Then I say to you: Do it. Just do it.”

Last month, Spokesman of the Atomic Energy Organization of Iran (AEOI) Behrouz Kamalvandi said that Iran had already quadrupled its capacity of uranium production, and said that the country would breach the limit of 300 kilograms set in the nuclear deal because they were not satisfied with their economic situation following the US’ re-imposed crippling sanctions on Iran’s economy after it left the nuclear deal.

The sanctions ended all the economic benefits the US granted Tehran for the nuclear deal. The new sanctions particularly hurt Iran’s oil industry, a crucial source of currency for its weak economy. Its national currency has plummeted, sending prices skyrocketing.

Most recently, the US in June imposed sanctions on Iran’s Supreme Ayatollah Leader Ali Khamenei, his office, and its appointees.

“The useless sanctioning of Islamic Revolution Supreme Leader and the commander of Iranian diplomacy means closing the doors of diplomacy by the US desperate administration,” Iran’s Foreign Ministry spokesman Abbas Mousavi tweeted in response to the latest US move.

“Trump’s government is annihilating all the established international mechanisms for keeping peace and security in the world,” he charged.

For just $10 per month you can bring the gospel to 1,000 homes. Join us as media missionaries! GIVE NOW
VIEW COMMENTS
« Israel Invested NIS 100 M. in Eastern Jerusalem Arab Neighborhoods, with a Focus on Education Together We Can End Human Trafficking »