Now another powerful movie from the producer of Miracles From Heaven is coming. The movie itself will debut at Easter 2019 but the trailer is already out. And, in just a day after releasing the trailer it has already hit over 19 million views!

So what is the movie all about that’s got the world hyped?

The movie is Breakthrough. It’s based on the inspiring true story of 14-year-old John Smith who fell through ice on a frozen lake in Missouri and the mother whose prayers defied the odds. Breakthrough stars Chrissy Metz (This Is Us), Topher Grace (That 70s Show), Mike Colter (Luke Cage) and Josh Lucas (Sweet Home Alabama). It is executive produced by NBA player and bold Christian Stephen Curry. 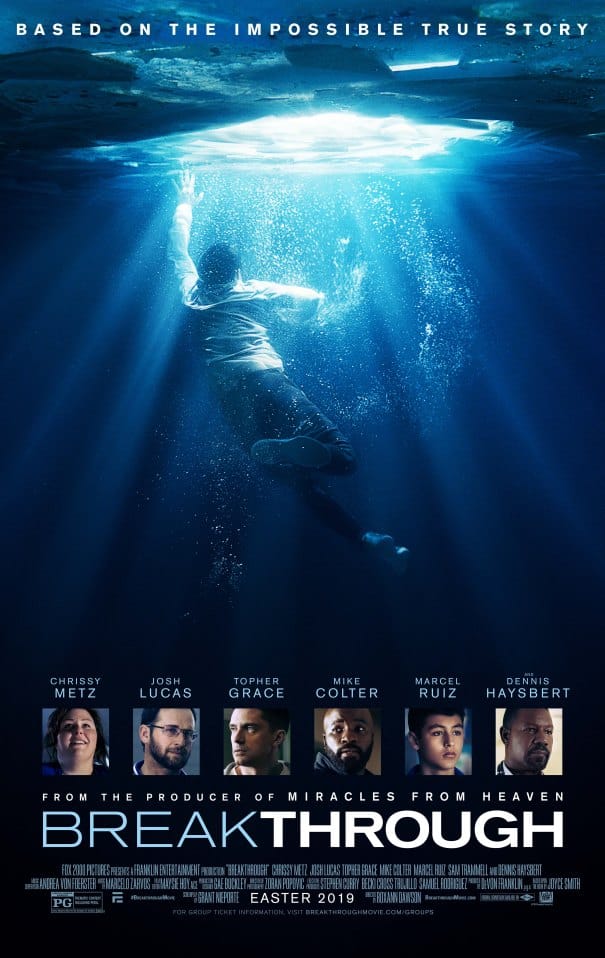 ***SPOILER ALERT – We reveal major plot-lines to this amazing true-life story. If you’d rather see the story unfold in film, do not read any further. Watch the trailer and go see this great film in theaters Easter 2019!***

The true story begins with a chilly winter morning on an icy lake in Missouri.

John and his friends were playing when suddenly a part of the ice where they were standing suddenly cracked. They plunged into the icy water and all but John made it out of the water onto the ice above. It was more than 15 minutes before he was rescued. Then for more than 60 minutes, John lay in hospital without any sign of life.

That’s when his mother, Joyce Smith, entered the room filled with tears. After all, the medical team had been performing CPR to John for almost a half-hour with no success but she still believed God would do something in the midst of what seemed like a hopeless case.

“After I entered his room, I put my hands on his feet, and they were cold and grey, and I just knew he was gone,” she told The Gospel Herald in an exclusive interview.

“I began praying out loud, begging God for my son’s life, and calling on the Holy Spirit, saying, ‘Please give me back my son.'”

And then, to her surprise, a miraculous thing happened. John’s pulse instantly returned after the prayer, stunning the nurses and doctors around him.

“The nurse had her finger on John’s pulse for 27 minutes, and had gotten nothing,” Joyce said.

“She told me, ‘The minute you prayed, something moved up John’s body with such force, it pushed me back – and suddenly, I got a pulse.’ They were stunned.”

John and his mother Joyce hope that his miraculous story reaches the whole world, so that they too might know the goodness and nearness of God, and that with faith, nothing is impossible.

“We’ve had so many people come up and say, ‘This story has changed my life and restored my faith in God. That’s what we hope people take away from our story, that it draws everyone who hears it closer to God,” Joyce said.

For just $100 per month you can bring the gospel to 10,000 homes. Join us as media missionaries! GIVE NOW
VIEW COMMENTS
« Virginia Public School Bans Any Christmas Song Mentioning ‘Jesus’ Hope, Power and Love Comes to Panama Through the Gospel »