BREAKING
Israel-led Team Solves Mystery Why Lightning Strikes Fewer Times Over The Ocean...
Tourism In The Holy Land Is Soaring Back Up To Pre-Pandemic Highs
Lapid Speaks Directly To Palestinians—Offers Them “Another Way” Out Of The Ongoing...
Home Articles New Film Into Ukraine Documents The Goodness Of God

New Film Into Ukraine Documents The Goodness Of God 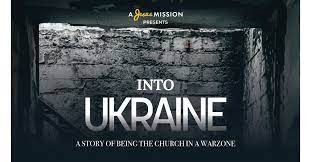 New documentary, Into Ukraine, captures missionary organization, A Jesus Mission, as they deliver food to the frontlines of the war in Ukraine. The film consists of raw footage from trips into villages actively being shelled and reflections from four of the delivery drivers and two men who have worked in Ukraine for years. Throughout the moving documentary, viewers are compelled to consider the powerful move of God occurring in the face of tragedy — and how they might respond to crises in their own cities.

“We want to encourage, you don’t need a crisis in Ukraine to respond to,” offers A Jesus Mission’s Pierce Westfall, who has been key to participating in aid missions. “There’s a crisis five minutes from everybody’s home in America. We just need to open our eyes to it. There are people who are abused. There are people losing their jobs. We have an opportunity to respond to crises every day of our lives, and God is as much present here as He is in Ukraine. He is waiting to show His goodness to us in the midst of crisis.”

The deep faith of the local churches of Ukraine is also captured, a poignant portrait of unity in the Body of Christ. “When a pastor in Ukraine meets another pastor in Ukraine, they no longer talk about doctrine. It’s that you know Jesus, I know Jesus, we need food, how can we help each other?” Westfall observes. “The world needs to see this, to be encouraged. In the midst of tragedy, God is very alive and at work in Eastern Europe.”

That dynamic has created fertile ground for the spread of the gospel. Westfall says, “Every time you’re going in, you find a pastor who’s praying for their daily bread because they haven’t had food in two days. When you show up, it’s a miracle to them.”

Although A Jesus Mission is traditionally a missionary organization rather than an aid organization, when war erupted early in 2022, they saw a need and responded. What began with a van and five volunteers quickly grew to a fleet of vans and 50 volunteers. Since March, A Jesus Mission has delivered more than 250,000 pounds of food to the frontlines.

Into Ukraine: A Story of Being the Church in a Warzone is available for private screenings at churches across the U.S. now. The documentary will also be available for streaming soon. In the meantime, A Jesus Mission is continuing to bring the support of food for the body and soul to the frontlines as the war continues to rage. A Jesus Mission hopes that the documentary can be an eye-opener about how urgent the need still is, while at the same time holding the call into Christ-like presence in communities at the fore.

“If churches are encouraged to walk in the fullness of their relationship with the Lord? That would be a win,” Westfall concludes.

The mission is currently offering private screenings of the film. To bring Into Ukraine to your church or ministry, email [email protected]

The film will be available to stream starting August 16, 2022.

A Jesus Mission is a missionary organization founded in 2013, with 120 missionaries currently serving in 17 countries. To learn more about their work, visit ajesusmission.org.