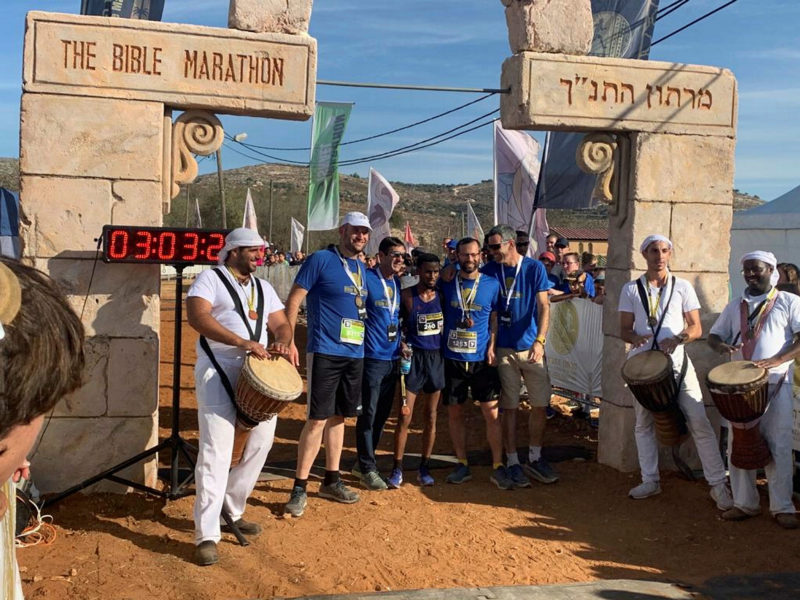 Some 4,000 contestants from Israel and around the world participated in the 5th Annual International Bible Marathon that ended at the ancient site of Tel Shiloh, at which the Tabernacle resided for hundreds of years.

The marathon, which took place on Friday, is one of five official Israeli marathons and is considered one of the most challenging. The marathon, which starts in the city of Rosh Ha’ain and ends in the Tabernacle site of Shiloh, follows the path of one of the first runs recorded in history when a man of Benjamin ran to report on the defeat of the Israelites by the Philistines on the battlefield. He ran from Even Ha’Ezer to Shiloh, as recorded in the Book of Samuel.

Many centuries later, the founder of the Maccabiah games, Yosef Yekutieli, set out to measure the length of the course from Rosh Ha’ayin to Shiloh, in the Benjamin region. He was amazed to find that the length of this historic path precisely matched that of a modern marathon – 42 kilometers.

Some 200 international runners from 23 countries, including the US, Brazil, Russia, Sweden, Singapore, Spain and competed, including a delegation that arrived for the first time from Entebbe, Uganda.

The winner of the Marathon, the Israeli Adiso Oskano from Rishon Letzion, broke a record with a time of 3:02:42. He stated after his win that his ambition was to “to test myself and the route of the run. It was tough but fascinating.”

The finishing ceremony, which was held at the archeological site, featured the winners receiving medals as well as a symbolic pottery vessel, a replica of an ancient vessel found in Shiloh.

Israel Gantz, head of Benyamin Regional Council, who kicked off the race, said that he was “proud and excited to stand here again and host the international Bible Marathon.”

“It is astonishing to have international runners from all over, connecting to the roots of the Bible and running in the footsteps of the man of Benjamin. It is a great honor to host the world’s most ancient running competition, here in the hills of Benjamin,” he stated.

CEO of Marathon Israel, Ofer Padan, said that when he heard the historical story of the man of Benjamin from his colleagues who were interested in reviving the ancient run, and “I understood that this is an amazing concept, one that will draw runners from Israel as well as from all over the world.”

“This is a unique biblical challenge that continues the tradition of the people of Israel. From year to year we see more runners from all religions and countries arriving especially to take part in this outstanding event,” he said.

Nick Nicholson of the UK, who is attempting to set a World Record by running 1,000 marathons in four years, ran his 985th track to the ancient site of Shiloh. He was made an Ambassador of Israeli Sporting Events.

For just $100 per month you can bring the gospel to 10,000 homes. Join us as media missionaries! GIVE NOW
VIEW COMMENTS
« 4 Obstacles To Biblical Prosperity Israeli Hospital Launches Collaboration with Largest Rehabilitation Facility in China »