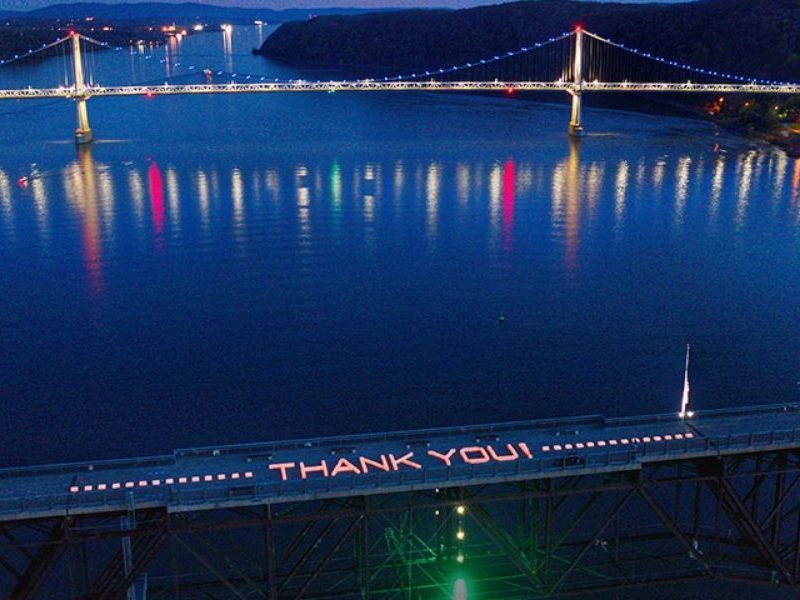 A pedestrian bridge in New York City was lit up to honor and give thanks to the health care workers and other front-line workers during this coronavirus crisis.

The walkway over in Hudson State Historic Park was lit up by more than 1,300 luminaries on April 30. It was to honor the front-line workers during this global pandemic. The iconic New York City landmark lit up to show the largest display of gratitude to those risking their lives for the community.

“We hope that through this grand display across the Walkway frontline workers know just how much we appreciate their tremendous efforts,” the executive director of Friends of the Walkway, Elizabeth Waldstein, said.

The display light that spanned more than 202 feet was assembled by several nonprofit organizations mobilized volunteers. They placed more than 1,300 illuminated bags marked with “Honor. Remember. Celebrate.” to spell out “THANK YOU.”

“It was really fun and rewarding to be involved,” one participant said. “I’ve never been so tired, doing over 18,000 steps that day, and bending over bags—but I’m so happy with the results!”

Prints of the photograph were also displayed to placed were the essential workers are serving. That includes emergency rooms, grocery stores, fire departments, and police stations.

“The Walkway is one of the icons of the Hudson Valley. There is no more fitting location to serve as the backdrop for this impressive gesture of thanks,” Friends of the Walkway Board of Directors Chairman John Storyk said. “In addition to a big thank you to frontline workers, I want to also extend thanks to everyone that lent their time and talents to create this spectacle.”

The pedestrian bridge that was initially built to connect people served its purpose during this crisis. Through this bridge, the community and the front-line workers are being connected.

“When the bridge first opened in the 1890s, it was known as The Great Connector. I think it lived up to that nickname here,” Linda Cooper of the New York State Office of Parks, Recreation, and Historic Preservation said.

Reference: Walkway Over The Hudson

For just $100 per month you can bring the gospel to 10,000 homes. Join us as media missionaries! GIVE NOW
VIEW COMMENTS
« Worldwide Prayer Event Hopes To Reach 1 Billion Souls By The End Of May Matthew West Spreads Joy With New Comedic Song ‘Quarantine Life’ »