BREAKING
Israel-led Team Solves Mystery Why Lightning Strikes Fewer Times Over The Ocean...
Tourism In The Holy Land Is Soaring Back Up To Pre-Pandemic Highs
Lapid Speaks Directly To Palestinians—Offers Them “Another Way” Out Of The Ongoing...
Home Articles If You Don’t Choose God, You’re Choosing The Enemy; There’s No Neutral Territory In This World

If You Don’t Choose God, You’re Choosing The Enemy; There’s No Neutral Territory In This World 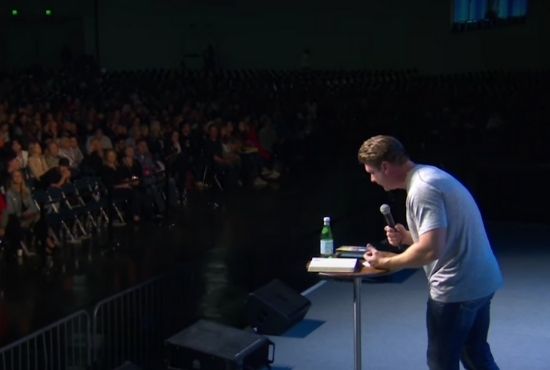 If you don’t choose God, you are choosing the enemy. There is no such thing as neutral territory in this world.

Missionary evangelist Daniel Kolenda has a powerful message for everyone, warning them that there’s no neutral territory. According to Daniel, as he read the Bible, he learned that there are only two sides – for Jesus or against Him – there is no middle ground for Him.

“The Jesus that I read about was a man that was very black and white,” he said. “There was not a lot of nuances. I like nuance when I think about different subjects and arguments and philosophies. I like to see the gradation and the colors and the different opinion, but Jesus wasn’t like that.”

Daniel then referenced Matthew 12:30 to emphasize that there is no neutral territory. It’s either you choose Jesus or not choose Jesus. No one can live for Him and also live for the enemy.

“There is no neutral territory… You can’t just decide to stand on the sidelines and not play the game. You are in this world and you are on one team or another. Jesus says if you’re not on My team, you’re on the opposing team. There’s no other place to stand,” Daniel said boldly.

Because God loves you so much, He wanted to set you apart from the world. He wanted to cut any bondages you have with the enemy and give you a brand new life that is solely for His glory. All you have to do is accept Jesus and choose Him.

There is No Neutral Territory | Daniel Kolenda

Read also: God Is Preparing You Because This Is Your Harvest Time