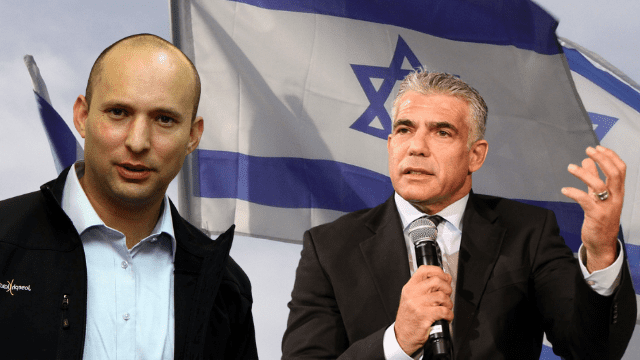 The “unity government”—a fragile coalition of right, left, center, and even an Islamist party—is inching toward the “start line” after Knesset Speaker Yariv Levin announced the new government would be voted on this Sunday.

Meanwhile, Prime Minister Benjamin Netanyahu and other right-wingers continue to pressure various MKs (Members of the Knesset) to defect from the coalition and render it hamstrung to fully govern before it even starts. Netanyahu and others are accusing Lapid and Naftali Bennett, leader of the Yamina party and the incoming prime minister—of putting the country in danger and linking arms with “terrorists.” National safety is always a high priority for Israel, but it is particularly at the forefront after the recent war with Hamas and continued protests and unrest in Jerusalem and the West Bank (Biblical Judea and Samaria).

One MK who had been wavering in his commitment to the coalition—Yamina MK Nir Orbach—announced Tuesday that he would pledge his support, helping to solidify the 61-member majority required to form a government. “I chose what’s good for the country,” said Orbach.

This was just a day after Mike Evans, an Evangelical leader, claimed that four MKs told him they wanted to vote against the new government but didn’t want to be the first, I would assume, to take the blame for sending Israel to the fifth election in two and half years.

Presumably, Orbach was one of them, but then he not only committed to the new government but wrote a scathing rebuke of how far the far-right has gone.

If there were any thoughts that he might still vote against the new government, they were quashed.

Still, passions on the right are running high. At least one MK has received death threats, and others have protestors lined up in front of their homes. Shin Bet (basically, Israel’s FBI) issued a warning on Saturday that the political atmosphere is charged like it was in 1995 when former Prime Minister Yitzhak Rabin was assassinated.

Some ultra-religious MKs—Haredi Jews—are calling Bennett “evil” and “wicked” and that he will “rot.” If the coalition is sworn in Sunday, Bennett will become the first kippah-wearing prime minister in Israel’s history.

While Israel has never had an entirely right or left-wing government, this will be the first time it has been this diverse. Left-wing parties and Ra’am, the Islamist party, will comprise 17 seats, the right has 19, and the center has 25. Netanyahu first opened the door for the Islamist party to be a part of the government but lost the support of the far-right religious groups in the process, as they would not serve with Ra’am.

The primary unifying factor among the coalition seems to be their mutual desire to oust Netanyahu from power. Bibi is vowing to remain the leader of his party, Likud, and preside as the opposition leader in the Knesset.

If Lapid and Bennett continue to hold the coalition together, the Knesset will vote on Sunday to swear in the government and usher Israel into the post-Netanyahu era. While this is the finish line of one chapter, it is only the start for another. Time will tell if this coalition of disparate groups will hold together once their mutual hatred of Bibi is satisfied. Or will it dissolve into infighting and gridlock and send Israel back for a fifth election?

For just $100 per month you can bring the gospel to 10,000 homes. Join us as media missionaries! GIVE NOW
VIEW COMMENTS
« Fear Of A Phone Call Turns Into $10,000 Blessing God’s Word For You Today: There Is Power In Prayer »