Movies with a Message: On the Waterfront (1954) 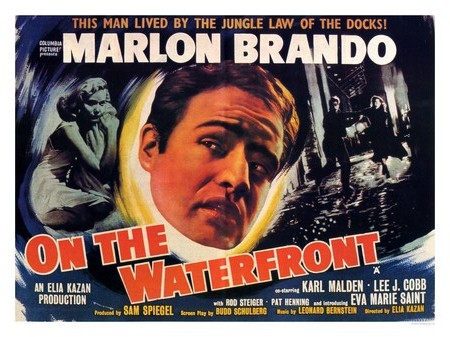 Elia Kazan’s masterpiece On the Waterfront won several Oscars, including Best Picture, back in 1954. Today this classic still stands up remarkably well, despite some inevitably dated elements that were a product of the censorship code of the time.

On the Waterfront is fascinating for reasons cinematic, historical and spiritual. Firstly on a cinematic level every element of the production – from Kazan’s gritty, realistic direction and superb use of locations, to Boris Kaufman’s moody black and white cinematography to the outstanding performances – combine to create a wholly gripping drama about conscience, sins of omission and the price of doing the right thing.

The first-rate cast includes Marlon Brando, Karl Malden, Lee J Cobb and Eva Marie Saint, but although Brando won the Oscar for Best Actor, during the film’s most famous speech (“I could’ve been a contender…”) he is almost acted off the screen by a deeply moving Rod Steiger.

Brando plays Terry Malloy, a tough errand boy for corrupt docker’s union boss Johnny Friendly. Terry dreams of being a prize fighter whilst tending pigeons and nursing past regrets, particularly regarding his relationship with his brother. But when he witnesses a murder committed by two of Johnny’s thugs, he is faced with a crisis of conscience about whether or not to keep silent. Terry then meets the dead man’s sister Edie, leading to romantic complications and gnawing guilt. Further complications ensue when Edie introduces Terry to Father Barry, a local priest who wants information that will bring down the dock racketeers.

Historically this has a fascinating production history, as Elia Kazan testified during the McCarthy Communist witch hunts. As a result this film is often read as an apology for informing. However, a third, spiritual dimension is also very much in the mix. Father Barry delivers a blistering condemnation of the silence of those who will not speak up against the murderous racketeers, demonstrating a moral fortitude that makes him one of the best representations of a Christian in the classic Hollywood era.

Additional stand-out scenes for me include the melodramatic but brilliant culmination of the love story (with Brando pounding on Eva Marie Saint’s door), and the final, thrilling punch-up that results when Terry finally (and inevitably) decides to do the right thing. Regardless of whether you view this through the lens of American political history or not, the spiritual message remains a hugely powerful one.