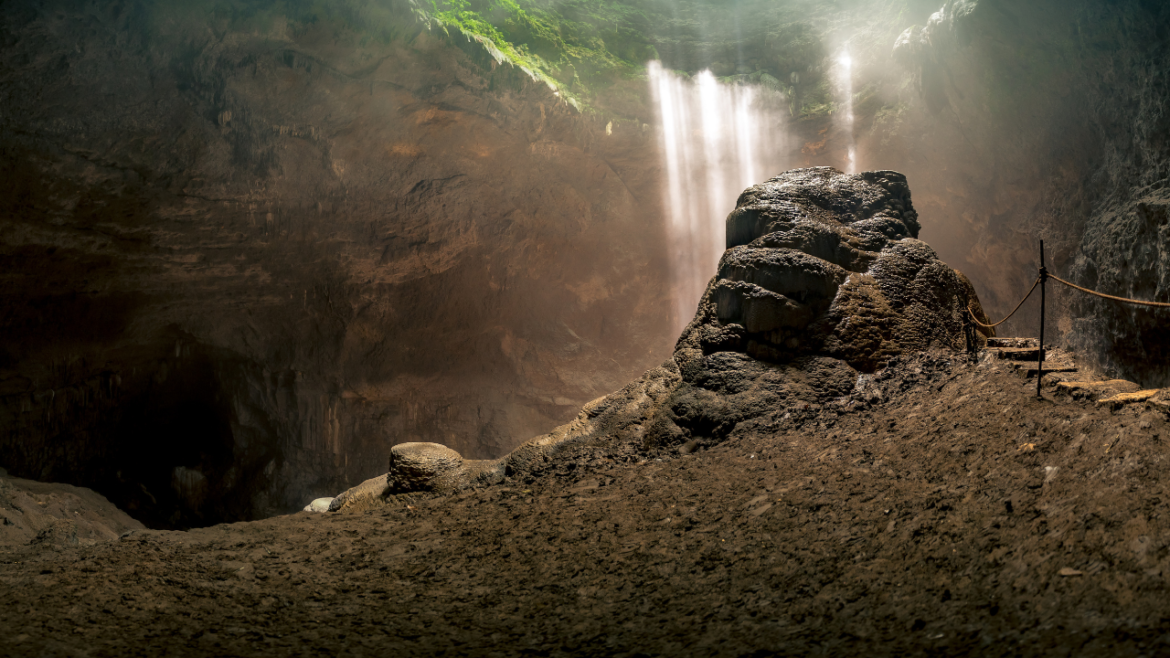 An excavator accidentally uncovered an ancient burial cave in southern Israel recently that is so well-preserved it looks like a scene out of an Indiana Jones movie. This is how it is in Israel—when you go to build even a parking lot, you can uncover a treasure!

The mechanical digger was working on a development project at Palmachim Beach National Park (The Palmachim were members of the elite pre-state fighting force in what would become the Israeli Defense Forces) along the coast south of Tel Aviv. The “once-in-a-lifetime” discovery occurred when the digger punched a hole in the roof of the 3,300-year-old square burial cave carved out of the rocks. The scene below looked like it was frozen in time.

The tomb “time capsule” is believed to be from the time of Pharoah Ramses II, who ruled Egypt when God liberated the children of Israel from slavery. The artifacts in the cave were basically laid out as they had been at the time of burial. There is a supporting pillar in the cave chamber. Dozens of artifacts, bronze pieces, arrowheads (or spearheads), and completely intact pottery were placed around the room (the belief was that the deceased might need them and could use the items in the afterlife).

Once the discovery was made, the Israel Antiquities Authority (IAA) was called, and archaeologists descended into the cave by ladder. Before this, it appeared that no one had been in the chamber for over three millennia (although it appears that between the time of discovery and the IAA arriving, some items were looted —“a few items were looted from the cave before it was sealed up, an issue that is now being investigated.”

“It is extremely rare to come across an ‘Indiana Jones film set’ – a cave floor laid out with vessels untouched for 3,300 years,” he said. “The fact that the cave was sealed, and not looted in later periods, will allow us to employ the modern scientific methods available today to retrieve much information from the artifacts and from the residues extant on the vessels – for example, organic remains that are not visible to the naked eye.”

“The cave may furnish a complete picture of the Late Bronze Age funerary customs,” Yannai said. “The cave predominantly contains dozens of pottery vessels of different forms and sizes, including deep and shallow bowls, some red-painted, footed chalices, cooking pots, storage jars, and lamps for lighting.”

Yannai believes that the storage jars and other smaller jugs in the chamber may have originated in ancient Tyre and Sidon (along the Lebanon and Syria coastline) and Cyprus.

“In this period, in the long reign of the 19th Egyptian dynasty Pharaoh Rameses II, the Egyptian empire controlled Canaan, and the Egyptian administration provided secure conditions for extensive international trade. These economic and social processes are reflected in the burial cave that contains pottery vessels imported from Cyprus and from Ugarit on the northern Syrian coast, as well as from nearby coastal towns, including Jaffa, Ashdod, Ashkelon, Gaza and Tel Ajjul.” Yannai said. “The population of Yavneh-Yam (Palmahim Beach) played an integral part in the lively trading activity that took place along the coast.”

For now, the cave has been sealed up again, and a guard is on watch. The IAA is cooperating with other researchers around the world who would like to explore this new find.

“The news of the discovery of the cave spread like wildfire in the academic world, and we have already received requests from many scholars to take part in the planned archaeological excavation. Within a few days, we will formulate a plan to carry out the research and the protection of this unique site, which is a feast for the archaeological world and for the ancient history of the land of Israel.”