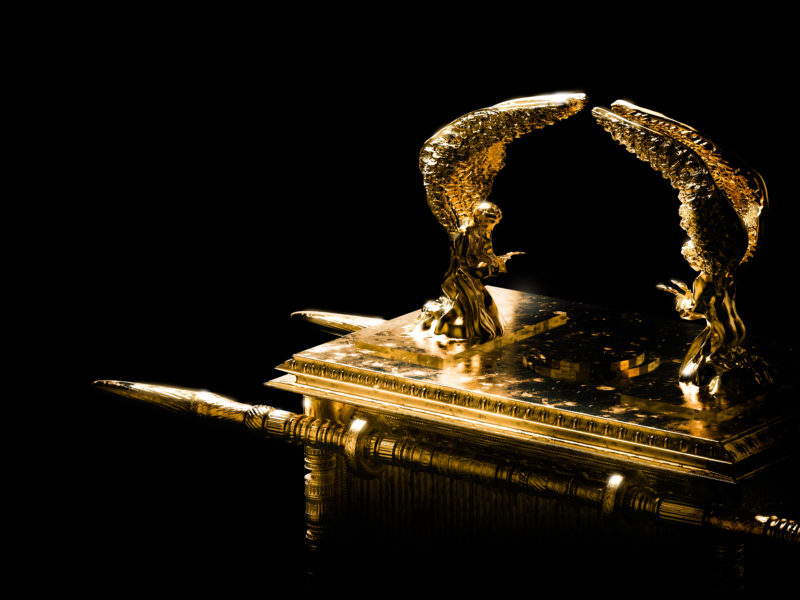 One of the things I love about the Bible is that every time that you read a book, chapter, or even a verse, you can find something that you never noticed before. When I study, I read with the purpose or intention of finding things that are missed because, while they are an important part of the greater Biblical narrative, they are often lost within

the context of the text they are a part of.

I came across one such example this week while reading Exodus 25:12-15:

12 You are to cast four rings of gold for it, and place them in its four feet. Two rings will be on one side, and two rings on the other side. 13 Also make poles of acacia wood and overlay them with gold. 14 You are to put the poles into the rings on the sides of the Ark, in order to carry the Ark. 15 The poles are to remain in the rings of the Ark, and not be taken from it.

These verses are a part of the instructions that G-D provided to Moses as he prepared to supervise the building of the Tabernacle. Specifically, these verses are a portion of the description of how to build the Ark of the Covenant. From these words, we can imagine just how beautiful the Ark was: built of wood covered in gold with intricate ornamentation. The Ark’s elegance is conveyed in such detail that, when we come to the verse above, they seem almost unimportant compared to the verses that surround them. After all, these verses only speak about the rings and poles used to carry the Ark. They are merely functional and utilitarian, and not very meaningful compared to the Ark, which would become the home to the Tablets of Stone engraved by the very finger of G-D, or the Atonement Cover, often referred to as the Mercy Seat.

15 The poles are to remain in the rings of the Ark, and not be taken from it.

This commandment that the poles should not be taken from or removed from the Ark of the Covenant is unique to this single piece of furniture. This seemingly insignificant difference is easy to overlook as we read, but it may contain symbolism that isn’t only relevant to the Israelites of that day, but also may be of great importance and value to us as believers today.

Let’s look a little deeper. The commandment specifically required two poles. These poles could represent the two parts of the Nation Israel: Judah the lower kingdom, and Israel the upper kingdom. Or they could represent the two parts of the covenant: the Tanakh (Old Testament) and Brit Chadashah (New Testament). Or maybe they represent humanity made up of Jews and Gentiles. I believe the poles are meant to represent Jews and Gentiles because the other two don’t fully fit. When the commandment was given to Moses, the nation had not been divided yet, and at that time, the only covenant that had been given was the Torah, written on the tablets that were commanded to be placed inside of the Ark within the same chapter.

But, does the idea of it representing Jews and Gentiles fit the symbolism? Well, wood in the Bible often represents humanity. In this case, it’s encased within gold representing G-D’s covering. These poles had one specific purpose and that was to carry the Ark which contained the word of G-D, the Two Tablets of Stone. Well, the idea that the poles would represent Jews, or Israelites, makes sense because they were chosen by G-D to carry and preserve the Word of G-D. But, what about the Gentiles? If we look back to Exodus 12, we find that a mixed multitude left Egypt along with the Children of Israel and both the Israelites and the Mixed Multitude together heard G-D speak from the mountain and they all together entered into Covenant with G-D at Mount Sinai. So, it does fit and make sense to see the two poles in terms of one being the Jewish people and the Gentiles, who had committed together to carry the Covenant of G-D.

If this symbolic picture is correct, then we see that G-D commanded those who would carry His covenant to never be removed from the Ark itself. Why so specific that the poles not be removed from the Ark when no such commandment was given concerning the other pieces of furniture? I believe that this commandment to not remove the poles from the Ark was a prophetic warning that those carrying the Ark should never be separated from the Ark and its contents. However, over the centuries since, that is exactly what happened. Both Jewish and Gentile followers of G-D have, in a real way, removed themselves from the Ark and the complete covenant that it represented. The Jewish people held strongly onto the Tanakh and the covenants within its pages and the Gentiles held onto the Brit Chadashah and the New Covenant. Instead of both groups remaining attached to the fullness of G-D’s covenants contained in both the Tanakh and Brit Chadashah, we see thousands of years of division and separation.

The warning provided in Ex 25:15 was ignored as the two poles were removed from the Ark. But, the good news is that in these last days, we have seen a restoration of the unity of Jewish believers and Gentile believers as they are becoming the One New Man spoken of in Ephesians chapter 2. Not only are the poles being restored to their place of being attached to the Ark, but with that restoration, the Body of Believers not only is restored to carry the Covenant of G-D, but also restores the other promises the Ark contained represented by Aaron’s Rod that budded, representing life from the dead, and the bowl of Manna, representing G-D’s miraculous provision for His people. But, unless the poles remain connected to the Ark carrying the covenant, G-D’s people cannot carry the covenant, life from the dead, and miraculous provision to those who desperately need them.

For just $100 per month you can bring the gospel to 10,000 homes. Join us as media missionaries! GIVE NOW
VIEW COMMENTS
« Israel Donates COVID-19 Vaccines to PA, European and Latin America Countries Everything Is Mental To Operate In Victory »