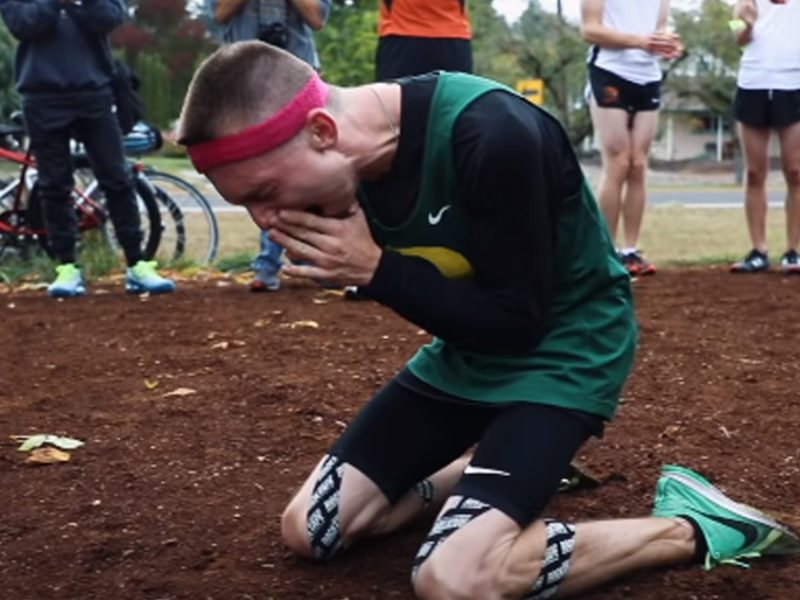 Justin Gallegos, an Oregon runner, became the first professional athlete with Cerebral Palsy to sign a contract with Nike!

October 6, was Cerebral Palsy Awareness Day and it was on this day that a junior from the University of Oregon’s running club made history when he signed a three-year contract with Nike Running.

Justin suffers from Cerebral Palsy, a neurological disorder that affects the movement, muscle tone, and motor skills of the person afflicted.  He used a walker as a toddler until his pre-school years and consulted a physical therapist to improve his walking abilities.

In his high school years, he started competing in long-distance running.  That is when Gallegos caught the attention of Nike.

Justin just finished a race on Saturday when he was met by his teammates, the camera crew of Elevation 0m, and Nike’s Insights director, John Douglass, who brought the contract and told him the good news of the deal. He calls this event one of the most emotional moments in his seven years of running.

He wrote in his Instagram post: “Growing up with a disability, the thought of becoming a professional athlete was like the thought of climbing Mount Everest!  It is definitely possible, but the odds are most definitely not in your favor!  Hard work pays off!”

Despite the overwhelming emotion, Justin never forgets to give praises to the One who truly makes his success possible!

“Trust the process!  And most of all trust in God! God is good!”

This article was written by Rhoda Gayle Cabrera of the Facebook page,  Bottom Line.  She is also a member of the I’m so Blessed Daily team and actively shares the word of God in the digital world.

For just $10 per month you can bring the gospel to 1,000 homes. Join us as media missionaries! GIVE NOW
VIEW COMMENTS
« We Need to Feed the Hungry She Wanted to Join ISIS But Met Jesus Instead, and Got Freed From Demons ON CAMERA! »