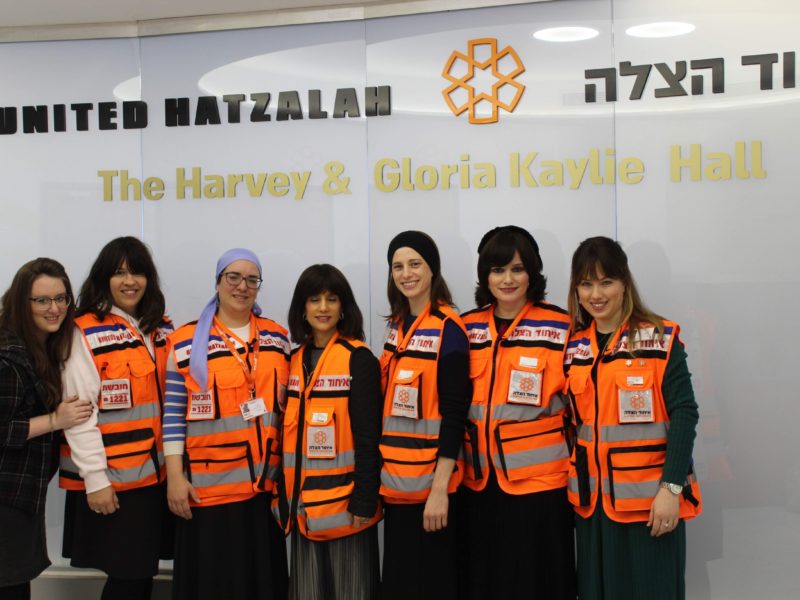 As she walks into the headquarters of United Hatzalah of Israel in Jerusalem, Rachel Frier is stopped time after time by Orthodox women who tell her how they gain inspiration from her story.

A 53-year-old Hasidic Jewish mother of six, grandmother and civil court judge  Frier arrived in Israel this week for the premiere of “93Queen,” a documentary that follows her as she creates Ezras Nashim, the first all-female ambulance crew in New York City, after  she was denied the opportunity to volunteer with the all-male Hatzolah volunteer ambulance service.

Frier was at United Hatzalah headquarters to meet with volunteers from the organization’s orthodox women’s unit, which has achieved unprecedented success in the Orthodox community in Israel.

“I am proud that United Hatzalah did embrace women and let them be part of the organization. Well done to the men who support these women and help us women thrive at what we do best, caregivers,” she said.

Frier, the first Hasidic woman to hold a public office in the United States, graduated from Brooklyn Law School at the age of 40 and she is now in her second year of a 10-year term as a civil court judge in Brooklyn’s 5th Municipal Court District.

Despite the cultural pressure and traditions within the Hassidic Jewish community that a woman’s role as a wife is to take care of the children and the house, Frier has always managed to break the glass ceiling.

In 2011, after being denied to volunteer for Hatzolah she decided to apply for a license to operate a volunteer ambulance service, Ezras Nashim – a play on the Hebrew for the women’s section of a synagogue – run and operated by women, for women.

“The worst thing to tell me is that I can’t do something because I’m a woman and I’m a religious woman. Women need women in labor and gynecological emergencies. When they said no and I understand there was no discussion, I had no choice but create my own organization” she said.

Frier says that the motivation that pushed her in the first place not to give over is that ultra-Orthodox women are often reluctant to seek help from male ambulance crews.

“Think about a woman who has never been seen with even her arms or legs exposed except by her husband, and suddenly a group of men, some of them very young, enter her house while she is exposed from the waist down. It makes perfect sense to me that a woman prefers to have another woman take care of her especially while giving birth,” Frier told TPS while surrounded by a group of young Orthodox women volunteers from the United Hatzalah all-women crew.

“In Jewish history midwives have always been women like Miriam and Yocheved. Who took it away from us?” she asks.

While listening to Gitty Beer, a United Hatzalah volunteer, who heads the organization’s women’s unit, explain about their work, Frier said she was very impressed by what the Hasidic women do and the support they receive from the men.

“I see here in Israel, Orthodox women and men cooperate to give the best service to the citizen. It is not even an argument,” she said. “I am completely amazed at what you do for the country in general and for women specifically. What I’ve learned today is amazing.  It is a pity that in Brooklyn we do not work together, but we are separate organizations.”

“You really inspired me,” Freier told Yaffa Goldschmidt, one of the United Hatzalah ultra-Orthodox volunteers who explained that being a woman really makes a difference for women in need of help, especially in calls that can be of a sensitive or private nature.

Despite the fact that Freier is well aware that back in Brooklyn the leadership of her community will not support her, she is optimistic for the future.

“I know the young generations support me,” she said. “They grew up looking at their moms volunteering, many of them even tell me they support me, the problem is the old leadership.”

By Mara Vigevani/TP // Photo by United Hatzalah of Israel

For just $100 per month you can bring the gospel to 10,000 homes. Join us as media missionaries! GIVE NOW
VIEW COMMENTS
« GOD TV Christmas Challenge: DAY 19 A Call To Higher Things »