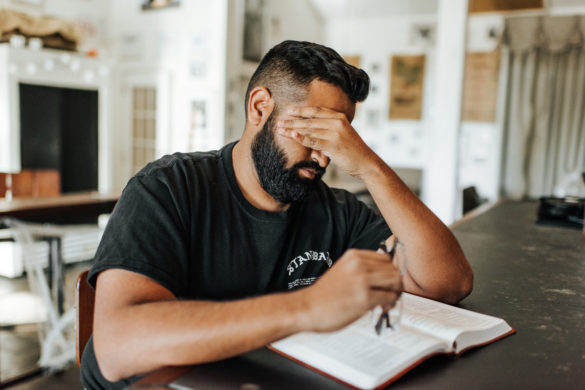 Today, I want to talk to you a little bit about how I was able to feel more confident with the Lord and overcome temptation. In 2 Corinthians 5:21 it says, “He who knew no sin became sin for us, that we might become the righteousness of God in him.” That was a big breakthrough for me in my life. When I realized that just as Abraham believed God, and it was credited or gifted or reckoned to him as righteousness, so also, as it says in Romans, we have believed God and it’s given to us as righteousness. That to me was a huge breakthrough in the area of temptation.

Whenever the enemy would come at me before with temptation, because they’re everywhere in this world, I would always feel like I’m not allowed to do that. I would like to do that, sort of, but I don’t, I’m not allowed to, I just need to resist it, get rid of those thoughts. When I realized that I was righteous, it changed my heart in the very moment that I realized that I could sin and I would still be righteous. I realized that I didn’t want to do those things. And so it actually took totally the temptations of the enemy and deflated them. It was like popping a balloon. And in Romans 4:1-8 it says, “What then shall we say that Abraham our forefather, according to the flesh has found? For if Abraham was justified by works, he has something to boast about, but not before God. For what does the scripture say? ‘And Abraham believed God and it was reckoned to him as righteousness.’ Now to the one who works, his wage is not reckoned as favor, but as what is due. But to the one who does not work, but believes in him who justifies the ungodly, his faith is reckoned as righteousness.” And then it goes on.

That was a huge breakthrough for me in my life. And I believe that the Lord has a breakthrough for you today. Where you’re struggling with temptation, where you’re struggling with confidence before the Lord, where you feel a little bit of guilt in your life, maybe a lot of guilt. Today is your day of breakthrough. So Father in heaven, I pray right now in the name of Jesus Christ, according to your will and by the power of your Holy Spirit, you’d reach out today and release that revelation, that breakthrough, that comfort, that confidence, and just complete victory in Jesus Christ. Father, we thank you for that. We agree for it, not only for ourselves, but for everybody else who’s watching. In Jesus Christ’s mighty name. Amen.