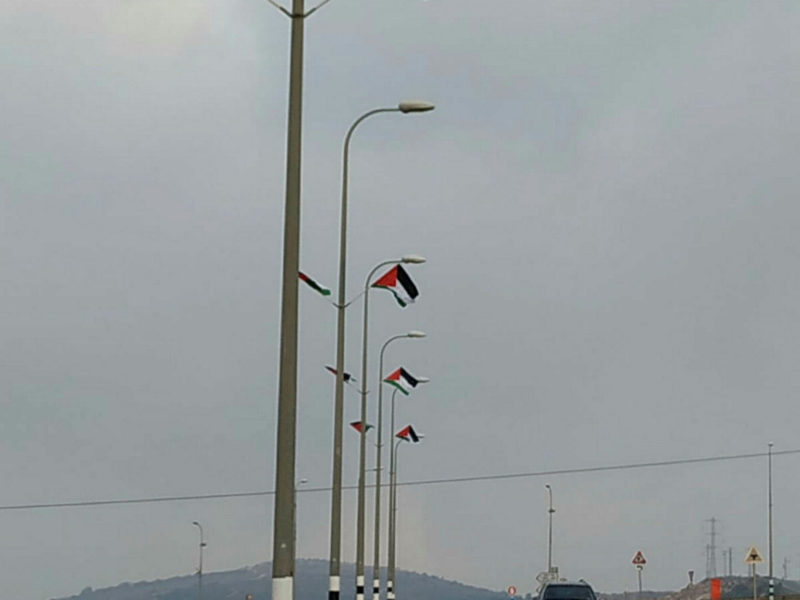 A right-wing organization seeking to warn of the danger of a Palestinian state silently developing under Israel’s nose hung Palestinian Authority (PA) flags on main roads throughout Judea and Samaria, sending a shockwave through the Israeli community in the area.

Thousands of Israeli motorists in Judea and Samaria on their way to work on Sunday morning were shocked to find major intersections and routes flying PA flags. Switchboards at local authorities were flooded with hundreds of calls, and social media was overflowing with photos and video clips filmed in the early morning hours.

Enraged motorists initially thought that the PA or a left-wing organization had hung the flags to make a statement, but it quickly became apparent that the Regavim organization was behind the display.

Regavim hung the flags as part of a larger campaign to shock, alert, and illustrate what will happen if illegal Arab construction is allowed to continue unhindered and a de facto Palestinian state is established as per the 2009 plan formulated by then-prime minister of the PA Salaam Fayyad.

Regavim, a research-based legal advocacy NGO dedicated to ensuring accountable use of Israel’s national land, has identified a three-pronged PA program that has doubled the rate of illegal Arab construction: the creation of strategic contiguity, a legal war of attrition, and agricultural land seizure.

After intensive data collection and a mapping project that took several months, Regavim released comprehensive data last on the Arab takeover of land in Area C, the area in Judea and Samaria under full Israeli jurisdiction as prescribed by the 1995 Oslo Accords.

The far more worrying statistic is the area covered by illegal Arab construction: In 2009, some 44,538 dunams of land in Area C were being occupied illegally by Arab construction. In 2018, over 78,626 dunams have been overtaken.

Regavim’s findings were further supported by a very blunt and worrying piece written by Kobi Eliraz, the outgoing Assistant for Judea and Samaria Affairs to the Minister of Defense, in which he decried the lack of enforcement and the erosion of Israeli sovereignty on the ground, which are enabling the unilateral creation of a de facto Palestinian state in Israel’s heartland.

Meir Deutsch, Director General of Regavim, responded to the media storm, stated that “we understand the harsh reactions of the residents of Yehuda and Shomron who saw the flags this morning, but we also understand that there is a terrorist state taking shape right around the corner. Residents of Yehuda and Shomron have been lulled into a dangerous slumber.”

“The flags we put up this morning will not determine the future of Yehuda and Shomron, but tens of thousands of illegal structures built in the past decade, and tens of thousands of dunams that have been seized by the Palestinian Authority with the support of European countries, most certainly will. The time has come for the government to take action and to stop the Fayyad Plan – not with words but with real on-the-ground deeds. It’s not too late, but time is running out.”

Yossi Dagan, head of the Shomron Regional Council, said that “the reality of tens of thousands of illegal houses built by the PA in Area C, which is facing zero response from the authorities, is much more serious than the hanging of a few PLO flags and removing them an hour later.”

“Regavim is right in their demands and every decent person should strengthen them. The government must come to its senses,” he said, warning that “if the government does not come to its senses and stop the Palestinian Authority taking control of Area C with the assistance of the European Union, the appearance of Palestinian flags over Samaria will not be a hallucinatory sight but the reality on the ground.”

He demanded “an immediate change in the area and an emergency plan to stop this quiet takeover of territories under full Israeli sovereignty.”

For just $100 per month you can bring the gospel to 10,000 homes. Join us as media missionaries! GIVE NOW
VIEW COMMENTS
« EXCLUSIVE: Saeb Erekat: Netanyahu is Left-Wing in Comparison with David Friedman July 4th: America’s Political Leaders Should Celebrate Our Heritage Rather Than Denigrate It »