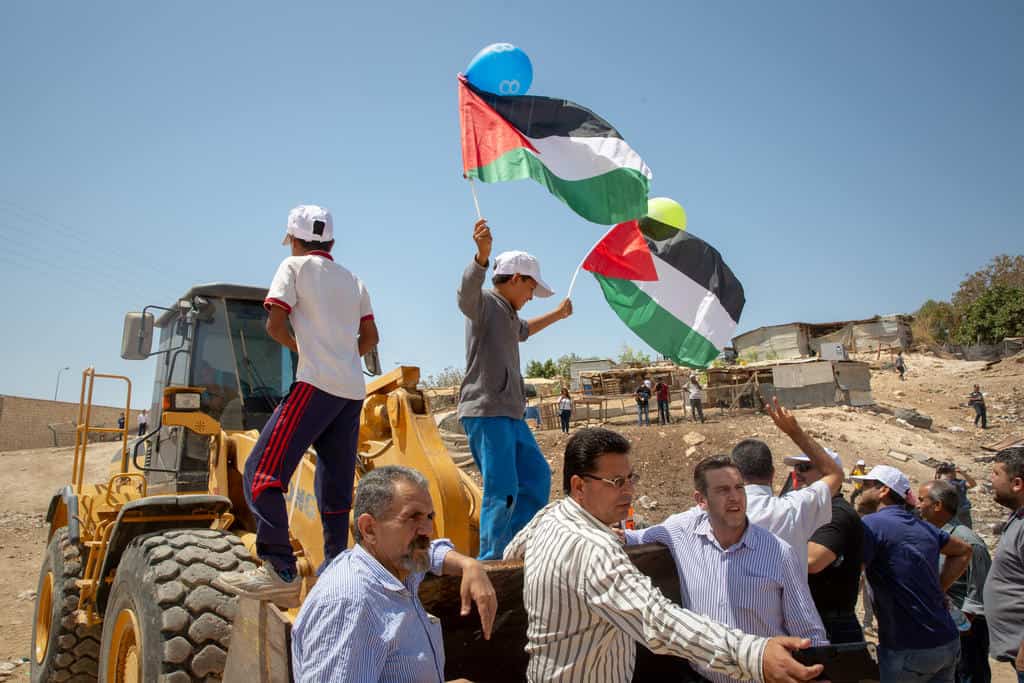 The Palestinian Authority (PA) is working to establish 16 schools at strategic locations near Israeli communities in the Jerusalem area with European Union funding.

Over the weekend, the Committee for Combating Settlements, under the auspices of the PLO and the PA and with the direction of its new director Moaid Shaban, set up a permanent structure to serve as a school in Ein Samia near the Israeli community of Kochav Hashahar. Up until recently, tents and shacks owned by Bedouin squatters inhabited the place.

The construction operation that began over the weekend ended on Tuesday, and already yesterday the PA received an extension of 10 days from an Israeli court to present documents of ownership to prevent the demolition of the illegal construction. The PA says it intends to submit documents that will allow the building to be licensed.

Dozens of activists and members of the Committee for Combating Settlements participated in the construction operation, and throughout the night they poured concrete and erected the permanent structure. The Al-Quds Center for Legal Aid provided the legal defense. The European Union also co-financed the construction of the school.

On Tuesday, Civil Administration inspectors arrived and photographed the site, but the Al-Quds Center for Legal Aid obtained a court order to prevent the demolishing of the building.

Sources in the PA say that the locations of the buildings planned for construction are not accidental and are intended to prevent the establishment of Israeli communities.

Sources indicate that there is a PA plan to establish 16 schools in permanent buildings and to establish additional illegal outposts. Hassan Brijia, who is in charge of the Committee for Combating Settlements in the Bethlehem area, convened a meeting designed to plan further steps in the area.

The Committee says that efforts are being made in Area C and the Jerusalem area to prevent Israeli construction in the direction of the Dead Sea and the Jordan Valley.

One of Fatah’s operatives in charge of the Bedouin concentrations in the Jerusalem and Ma’ale Adumim areas told TPS that strengthening the 130 Bedouin concentrations in the Ma’ale Adumim area is one of the PA’s overarching tasks. It should be noted that it was the Committees for the Struggle in the Settlements that conducted the struggle around Khan al-Ahmar and it prevented any agreement between the Khan al-Ahmar families and the State of Israel.

A government report prepared for a special discussion at the Knesset’s Foreign Affairs and Defense Committee this week revealed that the EU is investing half a billion dollars in the PA’s takeover of Area C.

The operation to establish the school near Kochav Hashahar is the first action of Moaid Shaban, who was appointed a month ago by a presidential decree on behalf of Mahmoud Abbas to head the Committee for the Struggle against the Settlements.

His predecessor, Walid Assaf, was forced to resign after corruption in which he was involved was exposed, including the purchase of land in the Jericho area and the Tulkarm area, while taking advantage of his position.

Shaban, 54, is a released prisoner and Fatah activist who was sentenced to 15 years in prison for his activities in the Fatah organization but was released 11 years later, as a tribute to the Palestinian Authority. Shaban was the commander of the Palestinian Authority Special Forces in the Tulkarm area and later moved on to the intelligence branch.