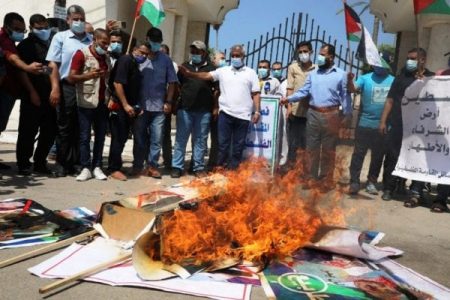 Palestinian Authority (PA) officials, including PA Prime Minister Mohammad Shtayyeh and Minister of Civil Affairs Hussein al-Sheikh, called the signing of the peace agreement in Washington a “black day” and PA chief negotiator with Israel Saeb Erekat said that he would not be surprised if it turns out that Bahrain and the United  Arab Emirates (UAE) signed the maps of Israel’s annexation in Jude and Samaria.

Shtayyeh said “this day will be added to the Palestinian calendar of pain and Arab calendar of defeats,” and accused the Arab League of being a “symbol of Arab ineptitude.”

Others in the Palestinian system likened the ceremony to the 1982 Sabra and Shatila massacre in Lebanon and others condemned the “decline of the Arab peoples” for allowing the Palestinian problem to be harmed.

The United National Headquarters, recently established by all Palestinian terrorist organizations at a conference between Ramallah and Beirut, is now leading the Palestinian Authority protests.

In Gaza, pictures of the rulers of the UAE and Bahrain and their flags were burned, but protestors in the PA refrained from doing so, probably following a presidential ban on the issue.

Ismail Haniya, the leader of Hamas, called PA head Mahmoud Abbas from the PLO headquarters in Beirut and talked with him about the need to establish a Palestinian front in the face of the recent developments.

Hamas has been warning against the use of peace agreements by an Israel to harm the Al-Aqsa mosques, following news that the Emirates’ rulers are planning a visit to the holy site.

The Islamic Jihad terror group said that the Abraham Accords was not a peace agreement but a military alliance with the Zionist enemy.

Meanwhile, in Bahrain and the Emirates, a holiday atmosphere can be felt. Bahrain’s Interior Minister Rashid bin Abdullah Al Khalifa said normalization of relations is a means of defending Bahrain from the Iranian hegemony that has threatened to undermine national security. Hק also said that while the Palestinians are an Arab issue, Bahrain is a crucial issue.

Emirates Foreign Minister Anwar Gargash said that the UAE had crossed the psychological barrier to full-fledged relations and even expressed hope that a large Israeli community would exist in the Emirates.

The Speaker of the Parliament in Bahrain Fawzia Zainal said that the signing of the peace agreement on the eve of World Democracy Day is a cultural message.

Abdullah bin Touq Al Marri, UAE Minister of Economy said that soon eight economic agreements will be signed in the fields of trade and industry and a source in the Emirates told TPS that there is a clear preference for business dealings with Israel by government ministries in the Emirates.

Responding to threats being issued by Iran, Turkey, and the Houthis in Yemen and Bahrain being called “Israel’s fools,” a Bahraini publicist said that “Israel is a more respected country than the regimes in Turkey, Iran, and Qatar and all the movements of political Islam. “

For just $100 per month you can bring the gospel to 10,000 homes. Join us as media missionaries! GIVE NOW
VIEW COMMENTS
« Gazan Terrorists Launch Multiple Rockets At Israel; Several Injured Israel Rushes To Close System As Number Of Daily Infections Passes 5,000 »