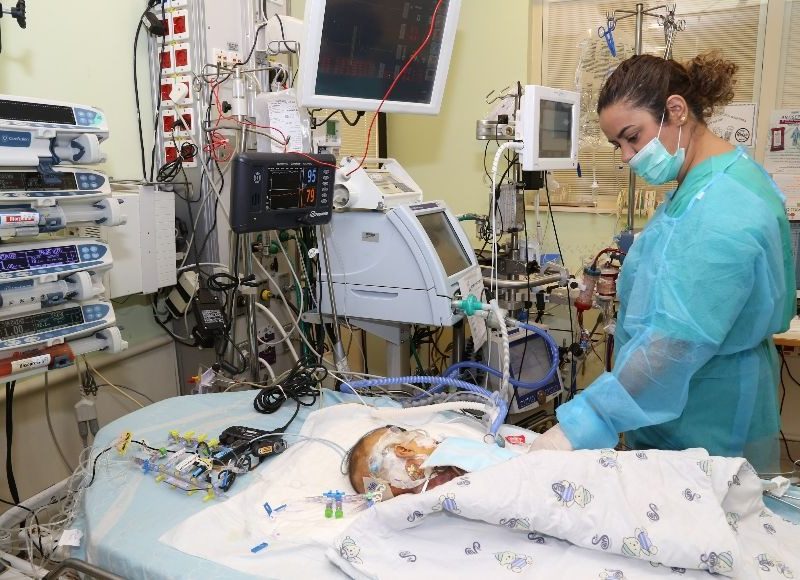 Clinging to life, a Palestinian baby from Ramallah has become the first-ever recipient of a heart transplant from an Israeli-Jewish child.

Six-month-old, Musa, had been sent several times to Sheba’s Safra Children’s Hospital from a local Ramallah hospital, in the West Bank, for treatment “after he was born with a variety of maladies, highlighted by tumors surrounding the heart region,” Sheba Medical Center in Tel Hashomer said in a statement.

But, three weeks ago Musa’s condition began to deteriorate as his heart began to reach “end stage” failure.

The donor, a 1.5-year-old Jewish child, died from a chronic disease late last week, and following this the transplant was done.

“There were several miracles associated with this complicated surgery,” Mishaly explained. “There is no such thing in the Palestinian Authority as an ‘organ donor or organ waiting list.’ While organ donor and waiting lists exist in Israel, there was no Israeli baby on the waiting list when the Palestinian baby, who is called Musa, was brought to Sheba in very critical condition.

“By a twist of fate, a miracle, Musa, was able to receive the new heart from the Jewish child, whose parents had agreed a few hours earlier to donate the heart,” he said.

He added that Sheba Medical Center is “an island an oasis of peace, where healing is the priority and everyone, regardless of who they are is treated equally, with dignity and respect.”

Musa remains in critical condition and is still fighting for his life at Sheba Medical Center’s Pediatric and Congenital Heart Surgery unit at the Safra Children’s Hospital.

“While it is a miracle that he survived the transplant surgery, his condition is still unstable. Musa was very sick to begin with,” Mishaly said. “Though Musa has a chance of surviving, there are numerous complications that we will have to deal with going forward.”

The infants’ grandmother said that she hopes to meet the Jewish family and thank them for their kindness.

For just $100 per month you can bring the gospel to 10,000 homes. Join us as media missionaries! GIVE NOW
VIEW COMMENTS
« Netanyahu: Abu Mazen Is Obstacle To Peace Palestinians Attack Supreme Court Judge David Mintz On Samaria Road »