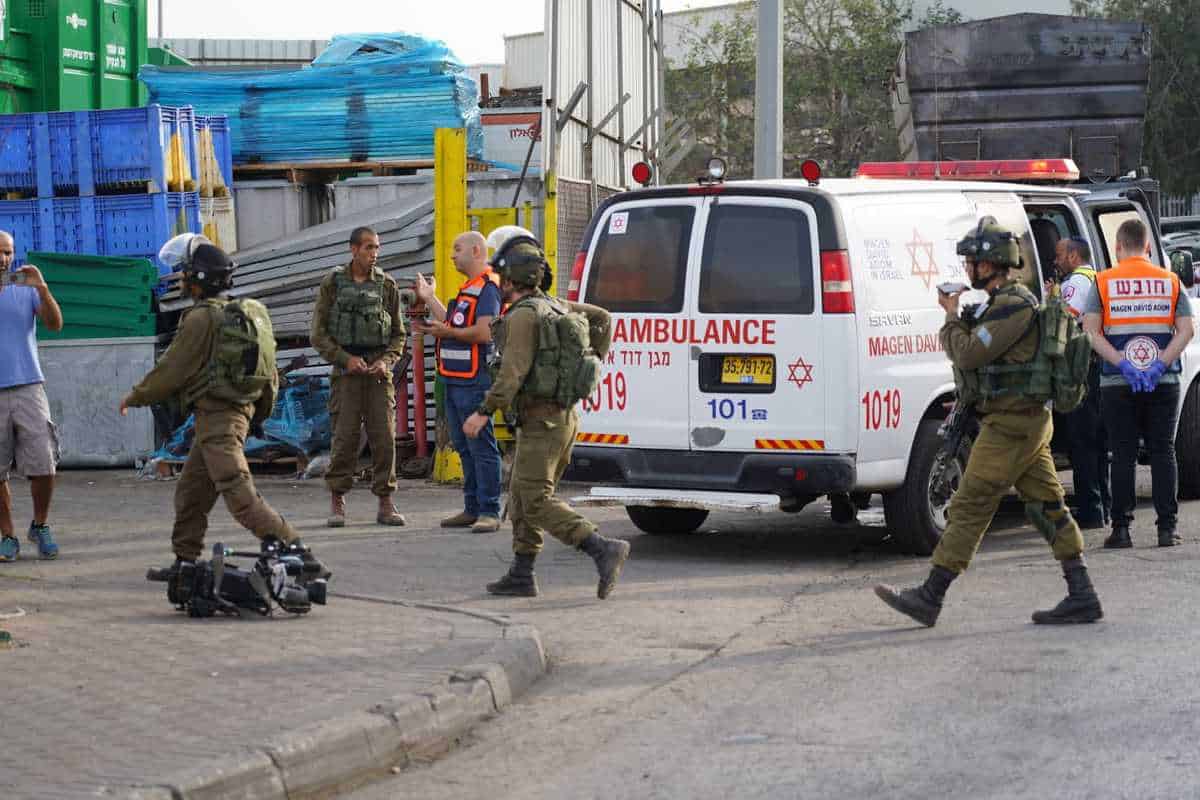 08:10 Three people were hurt, two critically in a shooting in the Barkan industrial zone near Ariel in Samaria, at around 7:50 Sunday morning.

08:15 Police and IDF forces are conducting searches for the shooter.

08:20 According to initial reports, the shooter is known to be a Palestinian from the town of Qalqilya and is known to security forces.

08:35 Magen David Adom paramedics say they arrived at the scene and found two people – a man and woman in their thirties- unconscious and suffering from gun shot wounds. A third victim, a woman in her fifties, was in serious condition after she too was shot.

08:40 A security source told TPS that initial reports suggested the shooting had been planned in advance and that the shooter was a 21 year old Palestinian resident of Qalqilya who worked at the metal factory where the shooting took place. The source added that all avenues were being investigated including both criminal and terrorist motivations for the attack. Other reports suggested the suspect had been fired some two months ago.

08:46 Head of the Samaria Regional Council Yossi Dagan arrived at the site of Sunday morning’s attack in the Barkan industrial area, which left three injured.

“This is a very serious event, in a very large factory in Israel, which exports a lot abroad. This is an industrial area where about 4,000 Israeli Jews and 4,000 Palestinians have been working together for decades – a bridge of co-existence. It only shows how much this terrorism is murderous to both Jews and Arabs, that is the barbarism of fundamental Islamic terror,” Dagan told Tazpit Press Service (TPS).

09:04 An IDF spokesman said security forces were conducting a wide scale sweep for the suspect. The background to the incident was as yet unclear and all avenues were being investigated, the spokesman said.

09:12 Channel 10 News reported that one of the victims was reported to be a senior executive at the factory and the shooting took place at management offices, strengthening suspicions that the attack may have been a revenge shooting.

10:52 Israeli authorities have deemed the incident a terrorist attack

10:55 Israeli Defense Minister Avigdor Liberman tweeted: “The IDF and security forces are conducting a wide scale search for the terrorist … it is only a matter of time before we lay our hands on him.”

11:00 A man and a woman have been confirmed dead in the incident

11:05 Security footage released from cameras at the factory shows the shooter fleeing the site holding an automatic rifle.

11:10 The Palestinian Islamic Jihad have taken responsibility for the attack, claiming it was “a response to Israel’s crimes in Gaza, Jerusalem, Khan al-Ahmar and al-Aqsa,” a spokesperson for the Palestinian Islamic Jihad movement said Sunday afternoon, “We call upon our people to rise up against the settlement terror until they are evacuated, and the West Bank is freed of settlements and settlers,” he added.

11:30 Prime Minister Benjamin Netanyahu: “This is a very serious terror attack, in which two Israelis were brutally murdered and a thirds injured. Security forces are in pursuit of the vile murderer. I am sure they will catch him, and I am sure we will bring him to justice. I would like to send condolences to the families of the two victims, as well as our prayers for a speedy recovery to the wounded victim.”

11:45 Israeli President Reuven ‘Ruvi’ Rivlin: “I am shocked and saddened by this morning’s terrible terrorist attack at the Barkan industrial area. Our hearts are with the families of those who were killed, and our prayers are with those who are injured. This was not only an attack on innocent people going about their daily lives, it was also an attack on the possibility of Israelis and Palestinians co-existing peacefully. I call on the Palestinian leadership to condemn this murderous attack and to use the forces at their disposal to capture the terrorist and those who aided him.”

12:00 Israeli Interior Minister Arye Deri has called for swift action by security forces “to bring justice to those murdered.”

“Our hearts are with the families of the victims. The abhorrent hatred and murder will only strengthen us,” he said.