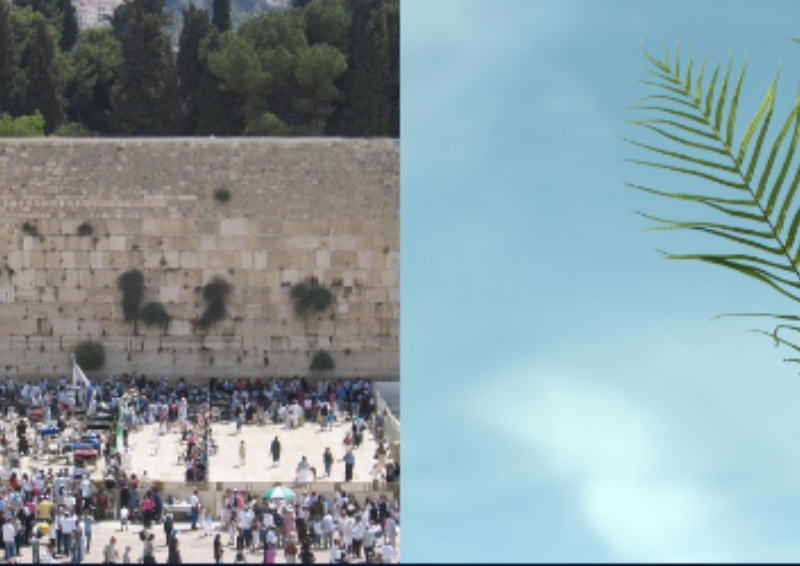 Last year, COVID-19 lockdowns forced the Passover priestly blessing to go virtual. On Monday, the Birkat Kohanim (priestly blessing) was once again live and in person, with thousands of worshippers in attendance at the Western Wall in Jerusalem.

“We have been privileged now to be blessed with many people in attendance, as it says, ‘The King’s glory is in a multitude of people,’” from a statement from the Western Wall Heritage Foundation.

Israel’s chief rabbis, the mayor of Jerusalem, and other government officials were at the event.

“Birkat Kohanim written in the Torah contains a promise to protect from harm and for peace in Israel,” said Rabbi Shmuel Rabinowitz, rabbi of the Western Wall and holy sites.

“In these difficult times, we need this blessing more than ever – a prayer for peace in the Jewish nation and for health for everyone in the world,” said Rabinowitz.

This blessing, known as the Aaronic Benediction, is a regular part of Jewish daily prayers. Twice a year, at Passover and Sukkot (Feast of Tabernacles), people come to Jerusalem to receive the blessing. This year marks the 50th anniversary since the Birkat Kohanim event was restarted. I have sung this blessing over gatherings of believers in Ukraine, Brazil, the US, Africa, Israel (of course) and many other nations.

On Sunday, across the land, Christian worshippers gathered once again in person for Palm Sunday and the start of Holy Week. For the first centuries Passover and the remembrance of Yeshua’s death were one in the same.

“There is no indication of the observance of the Easter festival in the New Testament, or in the writings of the Apostolic Fathers. The first Christians continued the observance of the Jewish [God’s] festivals, though in a new spirit, as commemorations of events which those festivals had foreshadowed” (Encyclopedia Britannica, 11th edition, p. 828).

Notice I said they remembrance of His death and not, celebration of His resurrection. The first believers, in the evening of the 14th of Nissan gathered to do what Paul commanded in Scripture.

For I received from the Lord what I also passed on to you: The Lord Yeshua, on the night he was betrayed, took bread, and when he had given thanks, he broke it and said, “This is my body, which is for you; do this in remembrance of me.” In the same way, after supper he took the cup, saying, “This cup is the new covenant in my blood; do this, whenever you drink it, in remembrance of me.” For whenever you eat this bread and drink this cup, you proclaim the Lord’s death until he comes. (1 Cor. 11:24-26)

The first communion was on Passover eve, and Yeshua said that when we takes His supper, we “proclaim His death until he comes.” I find it interesting that He did not say resurrection.

But as the church grew less Jewish, a desire arose to cease from the usage of the Jewish calendar, whereby Passover could fall on any day of the week, and use Sunday in its place for what they now called Easter. They also moved away from “proclaiming” (to make known in public, with implication of broad dissemination, proclaim, announce[1]) his death, to celebrating His resurrection. To be clear, I love to celebrate the fact that Yeshua rose from the dead, but the command, is to proclaim His death.

The switching of the days became official church doctrine in 325 when Constantine, the first Roman Emperor to embrace Christianity, gathered at Nicaea, with over 300 bishops. Phillip Schaff’s History of the Christian Church 3.79 says the Council outlawed Passover.

“The feast of the resurrection was thenceforth required to be celebrated everywhere on a Sunday, and never on the day of the Jewish passover, but always after the fourteenth of Nisan, on the Sunday after the first vernal full moon. The leading motive for this regulation was opposition to Judaism, which had dishonored the passover by the crucifixion of the Lord.”

The seem to have forgotten that no only were Jews involved in His crucifixion (with Romans), but it was the Jewish disciples, thousands of them, who spread the message of Yeshua to the Gentile nations. They no longer even viewed the apostles as Jewish. You can feel the anti-Semitism in Constantine’s letter to the Council.

“… it appeared an unworthy thing that in the celebration of this most holy feast we should follow the practice of the Jews, who have impiously defiled their hands with enormous sin, and are, therefore, deservedly afflicted with blindness of soul. … Let us then have nothing in common with the detestable Jewish crowd; for we have received from our Saviour a different way.”

So, while some take issue with the pagan roots of Easter, my deeper concern is that it was solidified in blatant, Jew-hatred. Now, I understand that millions of people today will celebrate Easter by focusing not on the persecution or hatred of Jews, but on the resurrection of The Jew—Yeshua. But it is important to know the history.

In Jerusalem, Christians gathered at the Church of the Holy Sepulchre. While Israel remains closed to tourists, there were hundreds of foreign nationals who work in Israel, as well as local Christians who met to worship at the site believed to be where Jesus was crucified, buried, and resurrected. The crowd later formed a procession and walked from the Mount of Olives into the Old City, waving palm and olive branches, commemorating Jesus’s triumphant entry into Jerusalem 2,000 years ago.

In Gaza and the West Bank – biblical Judea and Samaria – Christians also celebrated Palm Sunday. At the Church of the Nativity in Bethlehem, the site believed to be Jesus’s birthplace, worshippers sang hymns and held palm branches. Only about 1,000 Christians, mostly Greek Orthodox or Catholic, remain in Gaza. The Christian presence among Gaza’s 2 million residents used to be greater, but years of violence, war, and economic turmoil have forced many to flee.

For just $100 per month you can bring the gospel to 10,000 homes. Join us as media missionaries! GIVE NOW
VIEW COMMENTS
« Passover in Israel and the UAE! … A Year After The Lockdown Seder Firefighter Reveals Miracle That Saved Him From Raging Fire »